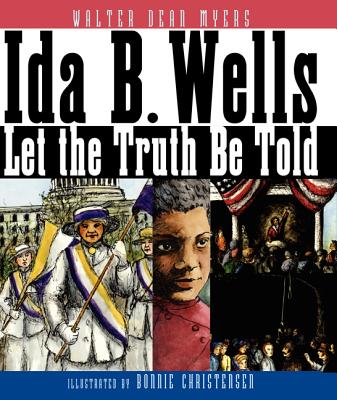 Let the Truth Be Told

Ida B. Wells worked bravely as an activist, educator, writer, journalist, suffragette, and pioneering voice against the horror of lynching. An inspiration for generations of civil rights crusaders, Wells's own words are used throughout this picture book biography to introduce young readers to this leader.

Brightly added: "Myers’s unflinching tale highlights Wells’s courage and persistence by using her own words and writings throughout, and sharing the many moments of her life when she refused to accept discrimination and raised her voice for justice"


Praise For Ida B. Wells: Let the Truth Be Told…

"Wells was born into slavery in 1862 in Mississippi. Myers follows her remarkable life from raising her siblings after the death of her parents, to her rise to national fame as a writer and speaker who worked tirelessly on behalf of African Americans and suffrage, and against the horrors of lynching. Readers will learn that long before Rosa Parks made history on a Montgomery bus, Wells refused to move from the ladies’ coach on a train, was forcibly removed, then sued the railroad." — School Library Journal (starred review)

"Myers deals with Wells-Barnett's career—from child of slaves, to teacher, to writer and organizer in the causes of anti-lynching and women's suffrage—in a style accessible to younger elementary audiences. Her best-known crusade, the fight against lynching, is treated frankly but sensitively, with the picture of an empty noose and a white mob waiting in anticipation ably conveying the coming tragedy." — Bulletin of the Center for Children’s Books

"Myers’ masterful text is well matched by Christensen’s somber watercolor illustrations: neither soft-pedals the injustice and cruelty to African Americans. Quotes from Wells’ autobiography are placed throughout, and a time line of the major aspects of her life is included. A fine introduction." — Booklist

"Ida B. Wells’s life as a crusader against lynching is thoroughly covered in books for older children, but perhaps the brutality of lynching has precluded her from being the icon for younger students that Harriet Tubman has been. Here, award-winning author Myers recounts her story in a picture book biography. With its timeline at the back, this book presents, for a younger audience, an understandable and compelling picture of a remarkable woman."
— Horn Book Magazine

"This picture-book biography relies powerfully on Wells’s own passionate words to tell her story: 'In the past ten years over a thousand black men and women and children have met this violent death at the hands of a white mob. And the rest of America has remained silent.' The design sets the staunch advocate’s quotations off from Myers’s accessible account, printing them in a typeface as bold as their speaker."  — Kirkus Reviews

Bonnie Christensen is a fine artist and printmaker who teaches at St. Michael’s College in Vermont. She has illustrated The Grapes of Wrath by John Steinbeck for the Folio Society in London and ten books for children, including Woody Guthrie: Poet of the People, a Boston Globe-Horn Book Honor Book, and Pompeii: Lost and Found.