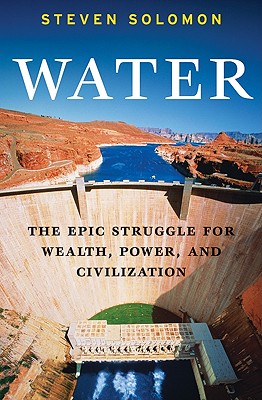 The Epic Struggle for Wealth, Power, and Civilization

“I read this wide-ranging and thoughtful book while sitting on the banks of the Ganges near Varanasi—it's a river already badly polluted, and now threatened by the melting of the loss of the glaciers at its source to global warming. Four hundred million people depend on it, and there's no backup plan. As Steven Solomon makes clear, the same is true the world over; this volume will give you the background to understand the forces that will drive much of 21st century history.” —Bill McKibben

In Water, esteemed journalist Steven Solomon describes a terrifying—and all too real—world in which access to fresh water has replaced oil as the primary cause of global conflicts that increasingly emanate from drought-ridden, overpopulated areas of the world. Meticulously researched and undeniably prescient, Water is a stunningly clear-eyed action statement on what Robert F Kennedy, Jr. calls “the biggest environmental and political challenge of our time.”


Praise For Water: The Epic Struggle for Wealth, Power, and Civilization…

“A tour de force. . . . Thoughtful. . . . Well-written. . . . Solomon shows that when the incentives are right—where governments and markets are allowed to focus on the real costs of and opportunities for using water resources--much better management of water systems follows.”
— The National Interest

“A fascinating and provocative work of history that shines new light on what is probably the biggest environmental and political challenge of our time. Steven Solomon’s brilliant book reveals how today’s planetary crisis of freshwater scarcity is recasting the world order and the societies in which we live.”
— Robert F. Kennedy, Jr.

“A sweeping history. . . . Solomon identifies plenty of obstacles to an equitable future, both institutional and geophysical, but remains optimistic that science-born solutions are in the offing. . . . A useful piece for readers interested in natural resources and the geopolitics attendant to them.”
— Kirkus Reviews

“Steven Solomon has written a riveting historical manifesto on behalf of Water Power. His sweeping narrative, covering centuries, is awe-inspiring. I learned a tremendous amount of usable knowledge from this fine work.”
— Douglas Brinkley

“Solomon’s soaring account of our attempt to manage earth’s total environment over millennia never neglects the individuals, inventions, and initiatives pivotal to that effort. Water is the most alarming and compelling call to action I’ve read since Rachel Carson’s Silent Spring.”
— Linda Lear, author of Rachel Carson

“Persuasive. . . . Unique. . . . Solomon surveys the current state of the world’s water resources by region, making a compelling case that the U.S. and other leading democracies have untapped strategic advantages that will only become more significant as water becomes scarcer.”
— Publishers Weekly

“This volume will give you the background to understand the forces that will drive much of 21st century history.”
— Bill McKibben

“Steven Solomon has written a riveting historical manifesto on behalf of Water Power. His sweeping narrative, covering centuries, is awe-inspiring. I learned a tremendous amount of usable knowledge from this fine work.”
— Douglas Brinkley, author of The Wilderness Warrior

“Seeking to inspire us to place a higher value on water and establish wiser approaches to its use, Solomon has created a brilliantly discursive and compelling epic of humankind’s most vital resource.”
— Booklist (starred review)

Steven Solomon is a journalist who has written for The New York Times, BusinessWeek, The Economist, Forbes, and Esquire, and has commented on NPR's Marketplace. He is also the author of The Confidence Game. Solomon lives in Washington, D.C.