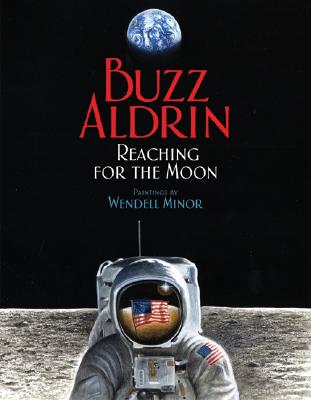 Reaching for the Moon

Perfect for the 50th anniversary of the Moon landing in summer 2019!

It’s been fifty years since Buzz Aldrin walked on the Moon. But the journey didn’t begin when he stepped on board Apollo 11 that fateful day in July 1969. It began the day he was born.

This picture book is Buzz Aldrin's story, in his words. Wendell Minor's gorgeous paintings evoke the wonder of space exploration for young readers.

Becoming an astronaut took more than education, discipline, and physical strength. It took years of determination and believing that any goal was possible—from riding a bike alone across the George Washington Bridge at age ten to making a footprint on the moon.

We all have our own dreams. This is the story of how Buzz’s came true.


Praise For Reaching for the Moon…

“A Buzz-worthy book!” — Time for Kids

“Precisely rendered illustrations help this effort really take off. A brief chronology rounds out this solid title.” — ALA Booklist

On July 20, 1969, Buzz Aldrin and Neil Armstrong made their historic Apollo 11 moon walk and became the first two humans to set foot on another world. This unprecedented heroic endeavor was witnessed by the largest worldwide television audience in history. Upon returning from the moon, Dr. Aldrin embarked on an international goodwill tour and was presented with the Presidential Medal of Freedom, among more than fifty distinguished awards and medals from numerous countries. Since retiring from NASA, the Air Force, and his position as commander of the test pilot school at Edwards Air Force Base, Dr. Aldrin has remained at the forefront of efforts to ensure a continued leading role for America in manned space exploration and has advanced his lifelong commitment to humans venturing outward in space. Recently he founded a rocket design company, Starcraft Boosters, Inc., and the ShareSpace Foundation, a nonprofit organization devoted to pursuing space tourism. In addition to writing books that describe his unique perspective on America's space program, Dr. Aldrin also lectures and travels throughout the world to discuss his and others’ ideas for exploring the universe.

Wendell Minor is nationally known for the artwork he has created for over sixty award-winning children’s books. His many collaborators include Jean Craighead George, Robert Burleigh, Buzz Aldrin, Tony Johnston, Nikki Grimes, Mary Higgins Clark, and, last but not least, his wife, Florence. He is also the author and illustrator of My Farm Friends.