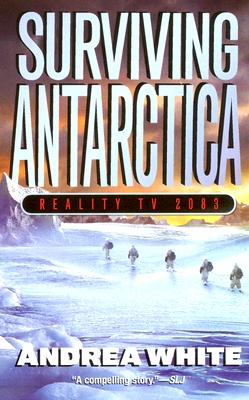 The wind and snow blow so hard, you can't see your hand in front of your face. Your heating fuel is nearly gone, and so is your food. How do you survive?

Five fourteen–year–olds face this desperate situation on a deadly journey in Antarctica. It is 2083. They are contes–tants on a reality TV show, Antarctic Survivor, which is set up to re–create Robert F. Scott's 1912 doomed attempt to be the first to reach the South Pole.

But in 2083 reality TV is not just an act. Contestants literally relive – or die during – the simulations of events. Robert Scott and his team were experienced explorers and scientists, but their attempt to reach the Pole proved fatal. What chance does the Antarctic Survivor team have?

This action–packed, riveting adventure – full of fascinating direct quotes from Scott's journals and other accounts of the expedition – is both a heart–wrenching drama from the past and a disquieting glimpse into the future.

Andrea White was born in Baton Rouge, Louisiana, but has spent most of her life in Houston, Texas. She received both undergraduate and law degrees from the University of Texas. She has had several short stories published; this is her first book.

Besides writing, Ms. White is a community volunteer and education activist. She is married to Bill White, formerly an energy official in the Clinton administration and now the mayor of Houston. The Whites have three children: Will, Elena, and Stephen. They love to hike and camp, and although they've had some hair-raising adventures, says Ms. White, all were tame compared to what happens in Surviving Antarctica.