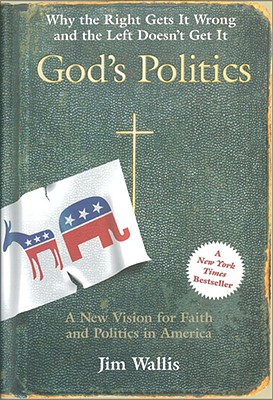 Since when did believing in God and having moral values make you pro-war, pro-rich, and pro-Republican? And since when did promoting and pursuing a progressive social agenda with a concern for economic security, health care, and educational opportunity mean you had to put faith in God aside?

While the Right in America has hijacked the language of faith to prop up its political agenda—an agenda not all people of faith support—the Left hasn't done much better, largely ignoring faith and continually separating moral discourse and personal ethics from public policy. While the Right argues that God's way is their way, the Left pursues an unrealistic separation of religious values from morally grounded political leadership. The consequence is a false choice between ideological religion and soulless politics.

The effect of this dilemma was made clear in the 2004 presidential election. The Democrats' miscalculations have left them despairing and searching for a way forward. It has become clear that someone must challenge the Republicans' claim that they speak for God, or that they hold a monopoly on moral values in the nation's public life. Wallis argues that America's separation of church and state does not require banishing moral and religious values from the public square. In fact, the very survival of America's social fabric depends on such values and vision to shape our politics—a dependence the nation's founders recognized.

God's Politics offers a clarion call to make both our religious communities and our government more accountable to key values of the prophetic religious tradition—that is, make them pro-justice, pro-peace, pro-environment, pro-equality, pro-consistent ethic of life (beyond single issue voting), and pro-family (without making scapegoats of single mothers or gays and lesbians). Our biblical faith and religious traditions simply do not allow us as a nation to continue to ignore the poor and marginalized, deny racial justice, tolerate the ravages of war, or turn away from the human rights of those made in the image of God. These are the values of love and justice, reconciliation, and community that Jesus taught and that are at the core of what many of us believe, Christian or not. In the tradition of prophets such as Martin Luther King Jr., Dorothy Day, and Desmond Tutu, Wallis inspires us to hold our political leaders and policies accountable by integrating our deepest moral convictions into our nation's public life.


Praise For God's Politics: Why the Right Gets It Wrong and the Left Doesn't Get It…

How far should we go to understand each other’s points of view? Maybe the distance grace covered on the cross.
— Bono, lead singer of U2

Jim Wallis is an inspiration to me– for his witness of faith and his engagement with politics.
— Bill Moyers

Jim Wallis is compelling, provocative, and inspirational, with faith that can move mountains and can certainly move people and communities.
— Archbishop Desmond Tutu

Wallis at his usual passionate and brilliant self: he will move you to examine your conscience and search your soul.
— E.J. Dionne, author of Stand Up Fight Back and Why Americans Hate Politics

Jim Wallis is the author of the New York Times bestseller God's Politics, which electrified Americans disenchanted with how the Right had co-opted all talk about integrating religious values into our politics by offering an alternative voice. Wallis is a leading figure at the crossroads of religion and politics in America today, the author of eight books, and the founder of Sojourners, a global faith and justice network. He is a public theologian, an internationally renowned speaker and preacher, a faith-based activist, husband, and father to two young boys, and a Little League baseball coach.