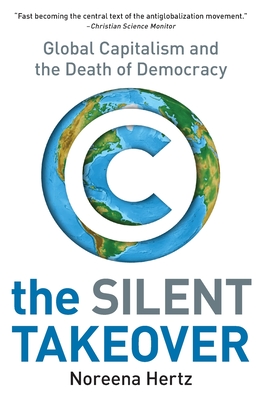 Global Capitalism and the Death of Democracy

Of the world's 100 largest economies, 51 are now corporations, only 49 are nation-states. The sales of General Motors and Ford are greater than the gross domestic product of the whole of sub-Saharan Africa, and Wal-Mart now has a turnover higher than the revenues of most of the states of Eastern Europe. Yet few of us understand fully the growing dominance of big business.

Widely acclaimed economist Noreena Hertz brilliantly reveals how corporations across the world manipulate and pressure governments by means both legal and illegal; how protest is becoming a more effective political weapon than the ballot-box; and how corporations are taking over from the state responsibility for everything from providing technology for schools to healthcare for the community.

The Silent Takeover asks us to recognize the growing contradictions of a world divided between haves and have-nots, of gated communities next to ghettos, of extreme poverty and unbelievable wealth. In the face of these unacceptable extremes, Noreena Hertz outlines a new agenda to revitalize politics and renew democracy.


Praise For The Silent Takeover: Global Capitalism and the Death of Democracy…

“The Silent Takeover raises issues that business and politicans would be unwise to ignore.”
— Financial Times

“Noreena Hertz is one of the world’s leading young thinkers.”
— Observer

“[Hertz’s] eloquent call to action deserves the attention of every concerned citizen of our troubled world.”
— Publishers Weekly

Noreena Hertz is a bestselling author, academic, and thinker. She has provided keynote addresses at TED and the World Economic Forum, sits on the board of Warner Music Group, and advises a range of major corporations. She is an honorary professor at the Centre for the Study of Decision-Making Uncertainty at University College London.