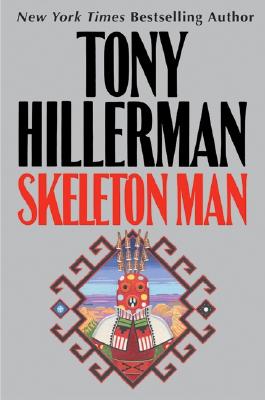 Hailed as "a wonderful storyteller" by the New York Times, and a "national and literary cultural sensation" by the Los Angeles Times, bestselling author Tony Hillerman is back with another blockbuster novel featuring the legendary Lieutenant Joe Leaphorn and Sergeant Jim Chee.

Former Navajo Tribal Police Lieutenant Joe Leaphorn comes out of retirement to help investigate what seems to be a trading post robbery. A simple-minded kid nailed for the crime is the cousin of an old colleague of Sergeant Jim Chee. He needs help and Chee, and his fiancée Bernie Manuelito, decide to provide it.

Proving the kid's innocence requires finding the remains of one of 172 people whose bodies were scattered among the cliffs of the Grand Canyon in an epic airline disaster 50 years in the past. That passenger had handcuffed to his wrist an attaché case filled with a fortune in -- one of which seems to have turned up in the robbery.

But with Hillerman, it can't be that simple. The daughter of the long-dead diamond dealer is also seeking his body. So is a most unpleasant fellow willing to kill to make sure she doesn't succeed. These two tense tales collide deep in the canyon at the place where an old man died trying to build a cult reviving reverence for the Hopi guardian of the Underworld. It's a race to the finish in a thunderous monsoon storm to see who will survive, who will be brought to justice, and who will finally unearth the Skeleton Man.

TONY HILLERMAN served as president of the Mystery Writers of America and received the Edgar and Grand Master Awards. His other honors include the Center for the American Indian’s Ambassador Award, the Spur Award for Best Western Novel, and the Navajo Tribal Council Special Friend of the Dineh award. A native of Oklahoma, Tony Hillerman lived in Albuquerque, New Mexico, until his death in 2008.

“Considerable suspense in the race to the bottom of one of the most spectacular and treacherous landscapes Hillerman’s ever explored.”
— Kirkus Reviews

“One of his strongest and most specific plots...amusingly wry dialogue...keenly observed detail.”
— Santa Fe New Mexican

“A fascinating whodunit and a window into a rich culture....a gem.”
— People
or
Not Currently Available for Direct Purchase
Copyright © 2020 American Booksellers Association