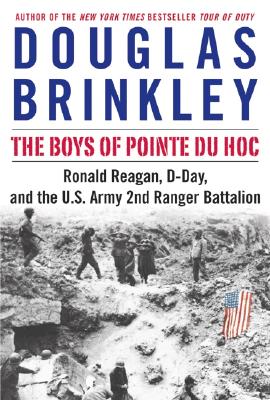 The Boys of Pointe du Hoc

Acclaimed historian and author of the "New York Times" bestselling Tour of Duty Douglas Brinkley tells the riveting account of the brave U.S. Army Rangers who stormed the coast of Normandy on D-Day and the President, forty years later, who paid them homage.

The importance of Pointe du Hoc to Allied planners like General Dwight Eisenhower cannot be overstated. The heavy U.S. and British warships poised in the English Channel had eighteen targets on their bombardment list for D-Day morning. The 100-foot promontory known as Pointe du Hoc -- where six big German guns were ensconced -- was number one. General Omar Bradley, in fact, called knocking out the Nazi defenses at the Pointe the toughest of any task assigned on June 6, 1944. Under the bulldoggish command of Colonel James E. Rudder of Texas, who is profiled here, these elite forces "Rudder's Rangers" -- took control of the fortified cliff. The liberation of Europe was under way.

Based upon recently released documents from the Ronald Reagan Presidential Library, the Eisenhower Center, Texas A & M University, and the U.S. Army Military History Institute, The Boys of Pointe du Hoc is the first in-depth, anecdotal remembrance of these fearless Army Rangers. With brilliant deftness, Brinkley moves between two events four decades apart to tell the dual story of the making of Reagan's two uplifting 1984 speeches, considered by many to be among the best orations the Great Communicator ever gave, and the actual heroic event, which was indelibly captured as well in the opening scenes of Steven Spielberg's "Saving Private Ryan".Just as compellingly, Brinkley tells the story of how Lisa Zanatta Henn, the daughter of a D-Day veteran, forged a special friendship with President Reagan that changed public perceptions of World War II veterans forever. Two White House speechwriters -- Peggy Noonan and Tony Dolan -- emerge in the narrative as the master scribes whose ethereal prose helped Reagan become the spokesperson for the entire World War II generation.

“Brinkley knows there is sometimes a theater to war and always to its remembrance.”
— Publishers Weekly

“The Boys of Pointe du Hoc are needed today.... An important and entertaining book.”
— Bill O'Reilly, host of The O'Reilly Factor

“Brinkley knows there is sometimes a theater to war and always to its remembrance.”
— Chris Matthews, host of Hardball and author of Kennedy and Nixon

“In this jewel of a book, Douglas Brinkley proves his skills as a master storyteller.”
— Doris Kearns Goodwin, author of No Ordinary Time

“In this fascinating new study, Douglas Brinkley... sheds fresh light on the making of a crucial presidential moment.”
— Jon Meacham, author of Franklin and Winston

“A powerful tale that celebrates, and explores, the patriotism and pride inspired by America’s brave soldiers.”
— Walter Isaacson, author of Benjamin Franklin