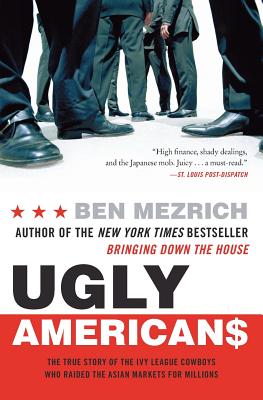 Ben Mezrich, author of the New York Times bestseller Bringing Down the House, returns with an astonishing story of Ivy League hedge-fund cowboys, high stakes, and the Asian underworld.

John Malcolm was the ultimate gunslinger in the Wild East, prepared to take on any level of risk in making mind-boggling sums of money. He and his friends were hedge-fund cowboys, living life on the adrenaline-, sex-, and drugs-fueled edge—kids running billion-dollar portfolios, trading information in the back rooms of high-class brothels and at VIP tables in nightclubs across the Far East.

Malcolm and his Ivy League-schooled twenty-something colleagues, with their warped sense of morality, created their own economic theory that would culminate in a single deal the likes of which had never been seen before—or since.


Praise For Ugly Americans: The True Story of the Ivy League Cowboys Who Raided the Asian Markets for Millions…

“A high-octane passion play pitting a young man’s ambition against his sense of humanity.”
— Oregonian