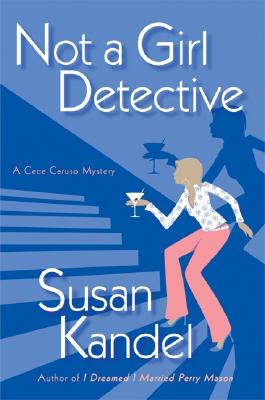 Not a Girl Detective (Hardcover)

Biographer and amateur sleuth Cece Caruso freely admits that she spent her youth idolizing girl detective Nancy Drew, a fantasy that undoubtedly influenced her grown-up job writing biographies of dead mystery writers. But as Cece will discover driving down the highway in her Jackie O. sunglasses and a borrowed baby-blue Cadillac, some fantasies die harder than others.

Researching the life of Carolyn Keene, the pseudonymous author of the Nancy Drew mysteries, Cece meets a flamboyant collector of "Blue Nancys," the original books with blue covers. When he finds out that she is taking a road trip to Palm Springs to snoop around at the annual Nancy Drew fan convention, he offers her the use of his swanky vacation house. But the last thing Cece expects to find lying around the swimming pool is one very dead body.

In a race against time that takes her from a secret enclave of restored Victorians near downtown L.A. to the driest stretches of California desert, Cece will have to channel her former idol and then some to unmask a sly killer -- before he comes after her. Of course, it helps to have a knockout collection of vintage clothing, though Cece prefers Azzedine Alaïa semigloss knits and Halston silver sequined berets to Nancy's prim suits and gloves.

Filled with wit, energy, and clever twists, not to mention one smart, hip heroine, Not a Girl Detective is pure entertainment.

Susan Kandel is a former art critic for the Los Angeles Times. She has taught at New York University and UCLA, and served as editor of the international journal artext. She lives in West Hollywood, California, with her husband, two daughters, and dog.


Praise For Not a Girl Detective: A Cece Caruso Mystery…

“The action moves along smartly.”
— Booklist

“Kandel offers up a race against time, a nail-biting chase and some unexpected twists and turns.”
— Denver Rocky Mountain News

“Full of comedy, intelligence and knowledge, this is a mystery you want to share.”
— Trenton NJ Times

“Not a Girl Detective...is as sparkling as a spilled packet of Sweet ‘n Low.”
— Washington Post Book World