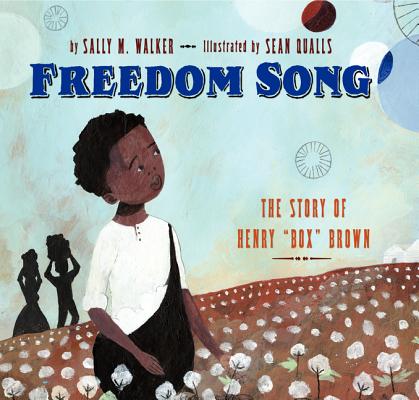 The Story of Henry "Box" Brown

An award-winning author and illustrator join forces in a stirring and emotional rich telling of Henry “Box” Brown’s famed escape from slavery—a feat he achieved by mailing himself to freedom. This nonfiction picture book is an excellent choice to share during homeschooling, in particular for children ages 6 to 8. It’s a fun way to learn to read and as a supplement for activity books for children.

Honoring Henry’s determination and courage, Sibert Medal–winning author Sally M. Walker weaves a lyrical, moving story of the human spirit. And in nuanced illustrations, Sean Qualls captures the moments of strength, despair, and gratitude that highlight the remarkable story of a man determined to be free.


Praise For Freedom Song: The Story of Henry "Box" Brown…

Poetic — Bulletin of the Center for Children’s Books (starred review)

Sally M. Walker’s many award-winning books bring history and science alive for young readers. Her books include the Robert F. Sibert Medal winner Secrets Of A Civil War Submarine: Solving the Mysteries of the H. L. Hunley and the Revolutionary War story The 18 Penny Goose (an I Can Read Book). Ms. Walker lives in DeKalb, Illinois.

Sean Qualls is the Coretta Scott King Honor illustrator of Before John Was a Jazz Giant: A Song of John Coltrane , by Carole Boston Weatherford. His art appears in many children’s books, including Little Cloud and Lady Wind, by Toni Morrison and Slade Morrison, and Giant Steps to Change the World, by Spike Lee and Tonya Lewis Lee. Mr. Qualls lives in Brooklyn, NY.