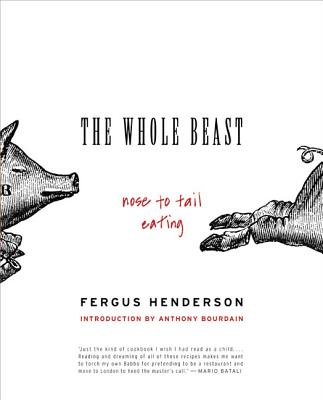 The Whole Beast: Nose to Tail Eating is a certified "foodie" classic. In it, Fergus Henderson -- whose London restaurant, St. John, is a world-renowned destination for people who love to eat "on the wild side" -- presents the recipes that have marked him out as one of the most innovative, yet traditional, chefs. Here are recipes that hark back to a strong rural tradition of delicious thrift, and that literally represent Henderson's motto, "Nose to Tail Eating" -- be they Pig's Trotter Stuffed with Potato, Rabbit Wrapped in Fennel and Bacon, or his signature dish of Roast Bone Marrow and Parsley Salad. For those of a less carnivorous bent, there are also splendid dishes such as Deviled Crab; Smoked Haddock, Mustard, and Saffron; Green Beans, Shallots, Garlic, and Anchovies; and to keep the sweetest tooth happy, there are gloriously satisfying puddings, notably the St. John Eccles Cakes, and a very nearly perfect Chocolate Ice Cream.

Fergus Henderson trained as an architect before becoming a chef, opening the French House Dining Room in 1992 and St. John in 1995, which has won numerous awards and accolades, including Best British and Best Overall London Restaurant at the 2001 Moët & Chandon Restaurant Awards. The Whole Beast won the 2000 Andre Simon Award.