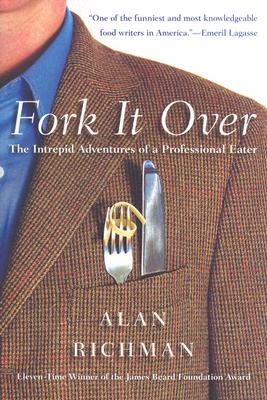 The Intrepid Adventures of a Professional Eater

Alan Richman has dined inmore unlikely locations and devoured more tasting menus than any three other food critics combined. Over the decades, his editors have complained incessantly about his expense accounts but never about his appetite. He has reviewed restaurants in all the best Communist countries (China, Vietnam, Cuba) and supped heartily all over the free world. Wherever he's gone, GQ magazine's acclaimed food, wine, and restaurant critic has brought along his impeccable palate, Herculean constitution, and biting humor.

In this globe-trotting literary smorgasbord, the eleven-time winner of the James Beard Foundation Award for food writing retraces his most savory culinary adventures. Richman's inexhaustible hunger and unquenchable curiosity take him to the best restaurants and most irresistible meals, from Monte Carlo to Corona, Queens. He seeks out the finest barbecue in America -- it's in Ayden, North Carolina, by the way -- the costliest sushi in Los Angeles, and the most perfumed black truffles in France. Along the way he has studied at Paul Bocuse's cooking school in Lyon (and failed), moonlighted as a sommelier in New York (and failed), and charmed his way through a candlelight dinner with actress Sharon Stone (and failed big time).

Through it all -- roughly 50,000 meals and still counting -- one thing is certain: Alan Richman has never come to a fork in the road without a fork in his hand.


Praise For Fork It Over: The Intrepid Adventures of a Professional Eater…

Alan Richman is a contributing writer for GQ, Condé Nast Traveler, and Bon Appétit, as well as the newly appointed Dean of Food Journalism atthe French Culinary Institute. He lives in Westchester County, New York, with his wife, Lettie Teague, a wine columnist and editor, and their two dogs, Sophie and Rudy. The dogs love Alan's cooking.