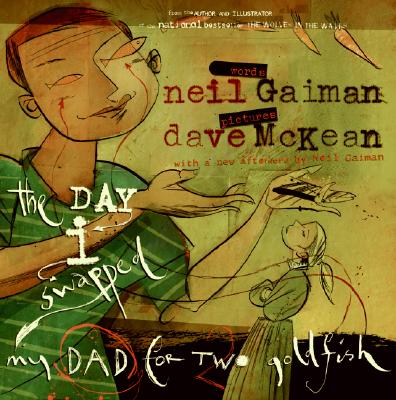 The Day I Swapped My Dad for Two Goldfish

This offbeat picture book from Neil Gaiman was described as "a bittersweet, guffaw-out-loud story from the most distinctive partnership in picture books today" by the Guardian.

What if you wanted your best friend's two goldfish so much that you'd swap anything for them, even your father?

What if your mother came home and found out what you'd done?

If the dad in your life is the sort who enjoys a laugh, especially one at his own expense, he will enjoy The Day I Sawpped My Dad for Two Goldfish


Praise For The Day I Swapped My Dad for Two Goldfish…

“A bittersweet, guffaw-out-loud story from the most distinctive partnership in picture books today.” — The Guardian (UK)

“McKean is in peak form here, with dark, spiky graphics that somehow manage to convey both sweetness and menace.” — Washington Post

“Leave it to Neil Gaiman to write a zany tale that’s swimmingly good.” — The Washington Missourian