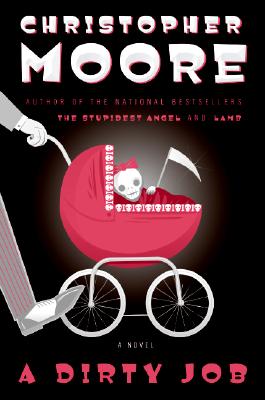 Charlie Asher is a pretty normal guy. A little hapless, somewhat neurotic, sort of a hypochondriac. He's what's known as a Beta Male: the kind of fellow who makes his way through life by being careful and constant -- you know, the one who's always there to pick up the pieces when the girl gets dumped by the bigger/taller/stronger Alpha Male.

But Charlie's been lucky. He owns a building in the heart of San Francisco, and runs a secondhand store with the help of a couple of loyal, if marginally insane, employees. He's married to a bright and pretty woman who actually loves him for his normalcy. And she, Rachel, is about to have their first child.

Yes, Charlie's doing okay for a Beta. That is, until the day his daughter, Sophie, is born. Just as Charlie -- exhausted from the birth -- turns to go home, he sees a strange man in mint-green golf wear at Rachel's hospital bedside, a man who claims that no one should be able to see him. But see him Charlie does, and from here on out, things get really weird. . . .

People start dropping dead around him, giant ravens perch on his building, and it seems that everywhere he goes, a dark presence whispers to him from under the streets. Strange names start appearing on his nightstand notepad, and before he knows it, those people end up dead, too. Yup, it seems that Charlie Asher has been recruited for a new job, an unpleasant but utterly necessary one: Death. It's a dirty job. But hey, somebody's gotta do it.

Christopher Moore, the man whose Lamb served up Jesus' "missing years" (with the funny parts left in), and whose Fluke found the deep humor in whale researchers' lives, now shines his comic light on the undiscovered country we all eventually explore -- death and dying -- and the results are hilarious, heartwarming, and a hell of a lot of fun.


Praise For A Dirty Job: A Novel…

“Makes you laugh in the face of death.”
— Rocky Mountain News

“[Moore] is superb in this mock epic of death and love. Smart people will be enormously amused.”
— Library Journal (starred review)

“One of the antic Moore’s funniest capers yet.”
— Kirkus Reviews

“Dizzyingly inventive and hypnotically engaging, A DIRTY JOB is . . . like no other book I’ve ever read.”
— Gregory Maguire, author of Wicked and Son of a Witch

“To keep a straight face while reading this book, one would have to be dead already ... Grade: A.”
— Rocky Mountain News

“[Moore’s] most speculative, tripped-out and deeply felt book to date.”
— The Oregonian (Portland)

“A bravura mix of the familiar and the hilariously original.”
— Denver Post

“[A DIRTY JOB] will keep a smile on your face long after you put it down.”
— Cleveland Plain Dealer

“Death, of course, is not usually a funny subject, but in the hands of Christopher Moore it sure is.”
— Hartford Courant