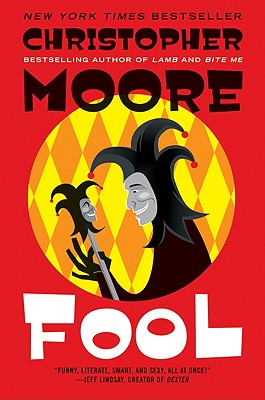 “Hilarious, always inventive, this is a book for all, especially uptight English teachers, bardolaters, and ministerial students.”
—Dallas Morning News


Praise For Fool: A Novel…

“Funny, literate, smart and sexy, all at once!” — Jeff Lindsay, author of the Dexter series, on FOOL

“Moore turns things on their head with an edgy 21st-century perspective that makes the story line as sharp, surly and slick as a game of Grand Theft Auto… It’s a manic, masterly mix-winning, wild and something today’s groundlings will applaud.” — Publishers Weekly on FOOL

“[W]all-to-wall, farcical fornicating and fighting…a jolly good time can be had.” — Booklist on FOOL

“Less may be more, but it isn’t Moore. Wretched excess doth have power to charm, and there are great reeking oodles of it strewn throughout these irreverent pages.” — Kirkus Reviews on FOOL

“In transforming “King Lear” into a potty-mouthed jape, Moore is up to more than thumbing his nose at a masterpiece. His version of Shakespeare’s Fool, who accompanies Lear on his slide from paternal arrogance to spiritual desolation in the original text, simultaneously honors and imaginatively enriches the character.” — San Francisco Chronicle on FOOL

“Often funny, sometimes hilarious, always inventive, this is a book for all, especially uptight English teachers, bardolaters and ministerial students of the kind who come to our doorstep on Saturday mornings.” — Dallas Morning News on FOOL

“The very definition of a bawdy romp: a broad, elbow-in-the-ribs, wink-wink homage to King Lear (but with quantities of shagging that would have kept legions of Grade 12 students glued to their copies had the Bard only thought to include it). …[A] riotous adventure.” — Winnipeg Free Press

“Moore is a very clever boy when it comes to words. There are good chuckles to be had in this tale. …Whether you need to read the original King Lear before you read Moore’s Fool is debatable. Seems a fool’s errand to us. Just enjoy.” — USA Today on FOOL

“A page-turner…. Your ‘Lear’ can be rusty or completely unread to appreciate this new perspective on the Shakespearean tragedy. That is if you enjoy a whole lot of silly behind the scenes of your tragedies.” — Valdosta Times (Georgia) on FOOL

“You don’t need to be a Shakespeare expert to get this retelling, which keeps the bones of the tragedy (mad monarch, scheming daughters, moatful of mayhem) but rattles them with cheeky tweaks and plays it all for laughs.…[Moore] achieves bust-a-gut funny.” — Daily News on FOOL