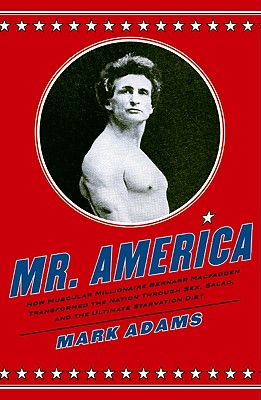 How Muscular Millionaire Bernarr Macfadden Transformed the Nation Through Sex, Salad, and the Ultimate Starvation Diet

“A remarkable story. . . . It is to Mark Adams’s great credit that, in Mr. America, he has rescued from obscurity a man whose influence is still felt in this country more than a century after he muscled his way onto the national scene.” —Wall Street Journal

“Hilarious. . . . Delightful. . . . If Macfadden hadn’t existed, we would have had to invent him.” —Washington Post

Mr. America is the fascinating true story of Bernarr Macfadden, a self-made millionaire and founding father of bodybuilding, alternative medicine, and tabloid culture. Madfadden’s impact on popular American culture is everywhere, from yoga to raw food diets to US Weekly, and Mr. America vividly brings to life this charismatic and intriguing character.


Praise For Mr. America: How Muscular Millionaire Bernarr Macfadden Transformed the Nation Through Sex, Salad, and the Ultimate Starvation Diet…

“In this impressive biography, Adams chronicles how, in the first half of the 20th century, Macfadden opened some of the country’s original health food restaurants and communes, assembled early bodybuilding shows, and built a $30 million magazine empire.”
— The New York Times Book Review

“An entertaining, enlightening read that . . . gives Macfadden his overdue legacy. . . . Adams deftly wrestles this messy, Herculean life into shape. . . . Even from the grave, it seems, Bernarr Macfadden continues to educate and shape America.”
— The Los Angeles Times

“As recounted by Adams (who self-tested some of Macfadden’s occasionally extreme advice about fasting and exercise), the improbable saga of this eccentric self-made guru shows that our mania for fad diets and get-fit-quick schemes has deep, and deeply weird, roots. Grade: A-”
— Entertainment Weekly

“Every decade ushers in a new ‘revolutionary’ exercise fad (or three). But as Mr. America points out, most of them probably owe a nod to Bernarr Macfadden and his magazine Physical Culture.”
— Men’s Journal

“Hilarious. . . . Delightful. . . . If Macfadden hadn’t existed, we would have had to invent him.”
— Louis Bayard, The Washington Post

“A remarkable story. . . . It is to Mark Adams’s great credit that, in Mr. America, he has rescued from obscurity a man whose influence is still felt in this country more than a century after he muscled his way onto the national scene.”
— The Wall Street Journal

“This book is a delightful and colorful piece of true Americana. Enjoy every twist and turn of it.”
— Elizabeth Gilbert, author of Eat, Pray, Love

“With such a great eccentric as his subject, Mark Adams shrewdly gets out of the way (and gives Macfadden’s extreme weight-loss regimens a try.”
— Details

“Mr. America is a must read for those interested in health and fitness.”
— The St. Petersburg Times

“Fascinating. . . . Adams spins a lively yarn in this biography of pioneering health-and-fitness guru Bernarr Macfadden. . . . A funny, informative history of a true American eccentric and the national preoccupation with health and fitness.”
— Kirkus Reviews

“In the first half of the twentieth century, Bernarr Macfadden was central to American popular culture. . . . Bravo to Adams for enabling the rediscovery of this phenomenal American.”
— Booklist

“A biography of one of the more amazing people whom few of us today have heard of. . . . Adams’s writing style and the fascinating life of Macfadden make this book hard to put down. Highly recommended for all libraries.”
— Library Journal

“A witty, perfectly pitched re-creation of a long-forgotten and madly outsized figure. Adams will make you laugh with fresh information on every page, and in this age of flabby, overlong biography, his delightful production has a leanness that Macfadden himself would approve of.”
— Thomas Mallon, author of Bandbox and Dewey Defeats Truman

“In this entertaining, briskly written biography, journalist Adams rescues from obscurity the history of Bernarr Macfadden. . . . Macfadden can claim to be the first person who hired and spotlighted the gossip columns of Walter Winchell and Ed Sullivan—creating another huge impact on American culture.”
— Publishers Weekly

“Imagine if Rupert Murdoch, Jack LaLanne, and Dr. Andrew Weil all got together and had a baby, then raised that child on wheat germ and 100 pushups a day. Only such a prodigy could give you a sense of the sheer eccentric magnificence of Bernarr Macfadden.”
— John Hodgman, author of The Areas of My Expertise and More Information Than You Require

“When you read this book, you’ll be astonished you hadn’t heard of Bernarr Macfadden—one of the most fascinating, brilliant, bizarre, and influential characters in American history. I know I was. I want to thank Mark Adams for bringing him to light in this great biography.”
— A.J. Jacobs, author of The Year of Living Biblically and The Know-It-All

“Bernarr Macfadden was the ultimate life coach and one of the great influencers of his generation. He set the stage for the world of health and self help as we know it today. Mr. America is required reading for anyone committed to increasing the quality of their life.”
— Baron Baptiste, author of Journey Into Power and Breaking Through

“Terrific. . . . A briskly paced, fascinating biography. . . . Mr. America reads like the strangest F. Scott Fitzgerald novel never written. . . . An entertaining look at the journey from meat and potatoes to veggies and soy milk.”
— The Onion

Mark Adams is a writer and editor whose work has appeared in GQ, Outside, the New York Times Magazine, Fortune, and New York. He lives near New York City with his wife and three sons.