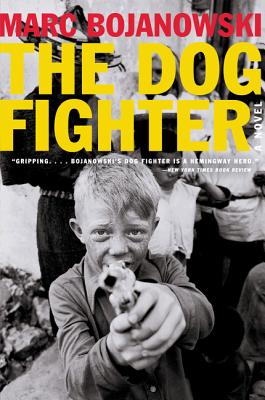 A stunning novel set in 1940s Mexico about a young man who becomes involved in a brutally violent spectator sport and must choose his loyalties in the fight for a city’s future.

The anonymous narrator of this remarkable novel is a young drifter in search of his future. The son of a passionate beauty and gentle doctor, he roams the border between the United States and Mexico, eventually settling in a sleepy Baja town on the verge of transformation.

Here he learns to stand face-to-face with dogs in a makeshift ring, to fight for money and fame, and becomes involved with a powerful and corrupt entrepreneur. But when he finds friendship with a revolutionary old poet and love with a beautiful, innocent girl, everything changes. Caught between the ways of his past and the dreams of his future, he must make a devastating choice that could cost him everything.

Written with bold lyricism and magical flair, The Dog Fighter is an exhilarating tale of brutality and violence, love and wisdom, heartbreak and redemption.


Praise For The Dog Fighter: A Novel…

“Remarkable…Bojanowski’s narrator has no name, but he is one of the most profoundly felt characters in recent fiction.”
— Dale Peck, author of Now It's Time to Say Goodbye

“Spellbinding. . . . An exceptional story of human loneliness and passion that will haunt every reader.”
— Library Journal

Marc Bojanowski graduated from the University of California at Berkeley and received his MFA in creative writing from the New School. His writing has appeared in The Literary Review. He lives in northern California.