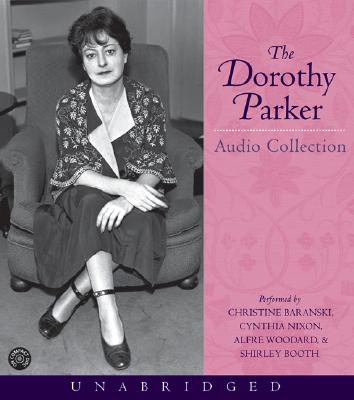 Author, poet, screenwriter and outstanding member of the legendary Algonquin Round Table, Dorothy Parker was known for her quick wit, keen observations, and remarkable insight into the human condition. Regarded as brilliant, but known to be an alcoholic and often depressed, Parker’s work pushes all buttons at once: humor, anger, love, pity and everything in bewteen…she pulled no punches, writing with pure, unadulterated passion; her work is timeless and as pertinent to today’s society as it was to that of the time she wrote.

Among the gems included in this collection are her first published short story, Such a Pretty Little Picture and her O. Henry Award winner Big Blonde, several other short stories, and, unlike other audio collections, some of her work, including her 1918 New Yorker piece on Tolstoy’s play Redemption and a 1927 Vanity Fair review of Emily Post’s Ettiquette.

Dorothy Parker (1893-1967) wrote short stories for The New Yorker for 30 years. She was married to Edwin Pond Parker II, once, and to Alan Campbell, twice. Upon her death she left her estate to Dr. Martin Luther King, Jr. She also provided that in the event of his death, her estate would pass on to the National Association for the Advancement of Colored People.

Christine Baranski, a two-time Tony®, Emmy®, and Screen Actors Guild award winner, has starred in such films as The Birdcage, Bowfinger, and Reversal of Fortune; her role in Cybill won an additional three Emmy® and three Golden Globe nominations; her fifth Emmy® nomination came for her guest role on Frasier.

Cynthia Nixon has been working professionally in film, television, and onstage since the age of twelve. Her best known role is Miranda on Sex and the City for which she received an Emmy® nomination and three consecutive Golden Globe nominations. She lives in New York with her two children: Samantha and Charlie.

Shirley Booth won an Academy Award for her performance in Come Back Little Sheba and was also noted for her stage performances in The Philadelphia Story and A Tree Grows In Brooklyn.
Loading...
or
Not Currently Available for Direct Purchase