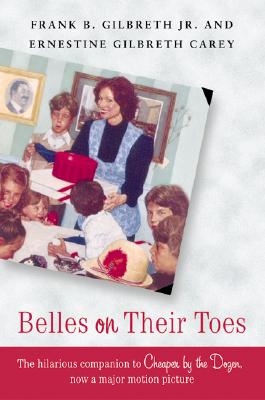 Belles on Their Toes (Paperback)

Life is very different now in the rambling Gilbreth house.When the youngest was two and the oldest eighteen, Dad died and Mother bravely took over his business. Now, to keep the family together, everyone has to pitch in and pinch pennies. The resourceful clan rises to every crisis with a marvelous sense of fun -- whether it's battling chicken pox, giving the boot to an unwelcome boyfriend, or even meeting the President. And the few distasteful things they can't overcome -- like castor oil -- they swallow with good humor and good grace. Belles on Their Toes is a warm, wonderful, and entertaining sequel to Cheaper by the Dozen.

Frank B. Gilbreth Jr. was born in 1911 in Plainfield, New Jersey, and graduated from the University of Michigan. He became a lieutenant commander in the U.S. Navy during World War II and received a Bronze Star and Air Medal. In 1947, he joined the staff of what is now the Post and Courier in Charleston, South Carolina. A columnist and reporter, he authored and coauthored several books, including Belles on Their Toes (with Ernestine Gilbreth Carey), How to Be a Father, and Time Out for Happiness. In 1950, he was corecipient (with his sister) of the French International Humor Award for Cheaper by the Dozen. He died in 2001.

Ernestine Gilbreth Carey was born in 1908 in New York City and graduated as an English major from Smith College. In 1930, soon after graduation, she began fourteen years of New York City department store buying and management. Meanwhile, she married and had two children. A writer and lecturer, she has authored and coauthored seven books, including Belles on Their Toes (with Frank Gilbreth Jr.), Jumping jupiter, Rings Around Us, and Giddy Moment. In 1950 she was corecipient (with her brother) of the French International Humor Award for Cheaper by the Dozen. She lives in Reedley, California.