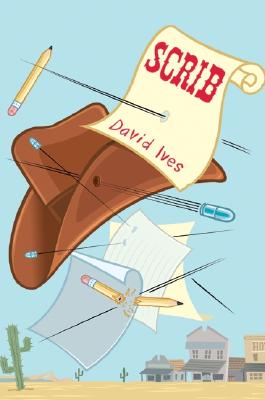 The night before his thirteenth birthday, Billy Christmas runs away from home in stodgy St. Louis and rides off to the Wild West, where he becomes Scrib, letter writer for lovelorn cowboys and wild-eyed outlaws.

Here is Scrib's own story, told in bubbling prose and babbling epistles, an ambling tale set in 1863, as Scrib travels his rounds on his horse Gabe, befriending all and running into deadly danger along the way.

This is probably the funniest, most outrageous cowboy story you will ever read. With the cleverness of Mark Twain at his best, the hilarity of a Mel Brooks movie, and the fast-moving speed of a train wreck, this is the Old West as it may not have been -- but should have!

David Ives was born in Chicago and educated at Northwestern University and Yale School of Drama. A Guggenheim Fellow in playwriting, he is probably best known for his evening of one-act comedies called "All In the Timing". The show won the Outer Critics Circle Playwriting Award, ran for two years Off-Broadway, and in the 1995-96 season was the most-performed play in the country after Shakespeare productions. His short plays are collected in two anthologies, "All In the Timing" (Vintage) and "Time Flies" (Grove). His full-length works for theatre are available in "Polish Joke and Other Plays" (Grove). He is also the author of a young adult novel, Monsieur Eek (HarperCollins), the almost-true story of how a chimpanzee got mistaken for a Frenchman.

David Ives is an Artistic Associate at Encores!, the celebrated forum for great American musicals at City Center, New York, where to date he has adapted 15 of their shows. He adapted David Copperfield's "Dreams and Nightmares" for Broadway, wrote the book for "Dance of the Vampires", the Jim Steinman Broadway musical, and is the co-bookwriter of "Irving Berlin's White Christmas", which premiered in San Francisco to huge acclaim in winter 2004. He lives in New York City with his wife Martha.

“Playwright, humorist and children’s author David Ives … is back with a second, wholly original kids’ book.”
— Time Out New York

“ … a hero worth cheering for; … adventures salted through with quirky wit, subtle ironies, and canny homespun wisdom.”
— Bulletin of the Center for Children’s Books

“ … this combines humor with Old West legends and lore to create an entertaining tale.…”
— KLIATT

“With a deft hand, playwright and novelist Ives (Monsieur Eek) sets this uproarious story in the lawless West in 1863.”
— Publishers Weekly (starred review)

“ …give this to readers who like their adventures salted through with quirky wit, subtle ironies, and canny homespun wisdom.”
— Bulletin of the Center for Children’s Books
or
Not Currently Available for Direct Purchase
Copyright © 2020 American Booksellers Association