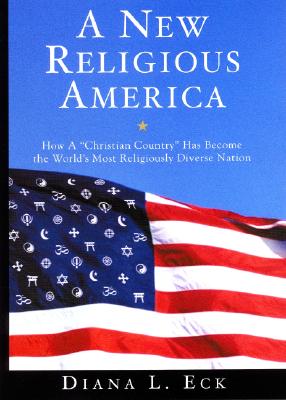 "The United States is the most religiously diverse nation in the world," leading religious scholar Diana Eck writes in this eye-opening guide to the religious realities of America today. The Immigration Act of 1965 eliminated the quotas linking immigration to national origins. Since then, Muslims, Buddhists, Hindus, Sikhs, Jams, Zoroastrians, and new varieties of Jews and Catholics have arrived from every part of the globe, radically altering the religious landscape of the United States. Members of the world's religions live not just on the other side of the world but in our neighborhoods; Hindu children go to school with Jewish children; Muslims, Buddhists, and Sikhs work side-by-side with Protestants and Catholics.

This new religious diversity is now a Main Street phenomenon, yet many Americans remain unaware of the profound change taking place at every level of our society, from local school boards to Congress, and in small-town Nebraska as well as New York City. Islamic centers and mosques, Hindu and Buddhist temples, and meditation centers can be found in virtually every major American metropolitan area. There are Muslims, Hindus, and Buddhists in Salt Lake City, Utah; Toledo, Ohio; and Jackson, Mississippi. Buddhism has become an American religion, as communities widely separated in Asia are now neighbors in Los Angeles, Seattle, and Chicago. Eck discovers Muslims worshiping in a U-Haul dealership in Pawtucket, Rhode Island; a gymnasium in Oklahoma City; and a former mattress showroom in Northridge, California. Hindu temples are housed in a warehouse in Queens, a former YMCA in New Jersey, and a former Methodist church in Minneapolis.

How Americans of all faiths and beliefs can engage with one another to shape a positive pluralism is one of the essential questions -- perhaps the most important facing American society. While race has been the dominant American social issue in the past century, religious diversity in our civil and neighborly lives is emerging, mostly unseen, as the great challenge of the twenty-first century. Diana Eck brilliantly analyzes these developments in the richest and most readable investigation of American society since Robert Bellah's classic, The Habits of the Heart. What Eck gives us in A New Religious America is a portrait of the diversity of religion in modern America, complete with engaging characters, fascinating stories, the tragedy of misunderstanding and hatred, and the hope of new friendships, offering a road map to guide us all in the richly diverse America of the twenty-first century.

An eye-opening Account of the changing Landscape of America


Praise For A New Religious America: How a "Christian Country" Has Become the World's Most Religiously Diverse Nation…

“A thought-provoking analysis of trends that will shape the United States for years to come.”
— Religious News Service

“This excellent overview of America’s exploding religious diversity doubles as an impassioned call to action.”
— Booklist

“A stunning tour de force that may forever change the way Americans claim to be ’one nation, under God.’”
— Publishers Weekly (*Starred Review*)

“There cannot be a wiser or more authoritative guide...rich, exciting, and illuminating.”
— Karen Armstrong, author of A History of God

“Diana Eck is the country’s best guide to America’s new pluralism.”
— Alan Wolfe, Boisi Center for Religion and Public Life, Boston College, author of One Nation, After All

“A thoroughly researched and lovingly written ethnography that tells us just what the subtitle promises.”
— Lauren Winner, Publishers Weekly

“This is a book I recommend to everyone I see.
— Bill Moyers

“This is more than a stuffy study. It’s an ambitious survey that celebrates the country’s growing religious diversity.”
— Steve Rabey, Religion News Service

Diana L. Eck is Professor of Comparative Religion and Indian Studies at Harvard University and is Master of Lowell House and Director of The Pluralism Project. As a Christian, she has also been involved in the United Methodist Church, the World Council of Churches, and the life of Harvard Divinity School. Her book Encountering God: A Spiritual Journey from Bozeman to Banaras won the prestigious Grawemeyer Book Award. In 1998, President Clinton awarded her the National Humanities Medal for the work of The Pluralism Project in the investigation of America's religious diversity.