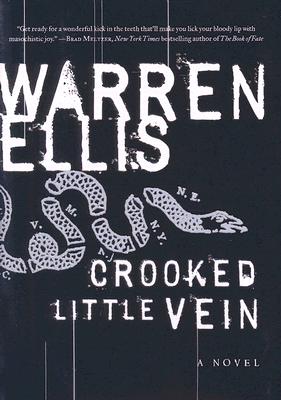 Burned-out private detective and self-styled shit magnet Michael McGill needed a wake-up call to jump-start his dead career. What he got was a virtual cattle prod to the crotch, in the form of an impossible assignment delivered directly from the president's heroin-addict chief of staff. It seems the Constitution of the United States has some skeletons in its closet: the Founding Fathers doubted that the document would be able to stave off human nature indefinitely, so they devised a backup Constitution to deploy at the first sign of crisis. In the government's eyes, that time is now, as America is overgrown with perverts who spend more time surfing the Web for fetish porn than they do reading a newspaper. They want to use this "Secret Constitution" to drive the country back to a time when civility, God, and mom's homemade apple pie were all that mattered.

So who better to track it down than a private dick who's so down-and-out that he's coming up the other side, a shamus whose only skill is stumbling into every depraved situation imaginable?

With no lead to speak of, and no knowledge of the underground world in which the Constitution has traveled, McGill embarks on a cross-country odyssey of America's darkest, dankest underbelly. Along the way, his white-bread sensibilities are treated to a smorgasbord of depravity that runs the gamut of human imagination. The filth mounts; it is clear that this isn't the kind of life, liberty, or happiness that Thomas Jefferson thought Americans would enjoy in the twenty-first century.

But what McGill learns as he closes in on the real Constitution is that freedom takes many forms, the most important of which may be the fight against the "good old days." Like Vonnegut, Orwell, and Huxley before him, Warren Ellis deftly exposes the hypocrisy of the "moral majority" by giving us a glimpse at the monstrous outcome that their overzealous policies would achieve.

“[C]ompletely compulsive, impossible to put down.”
— Globe and Mail (Toronto)

“Not for the faint of heart...surprisingly funny (with shades of Lamb author Christopher Moore).”
— Entertainment Weekly

“[M]ay be destined to become one of the great underground classics of the 21st century.”
— Lansing State Journal

“A relentlessly fascinating page-turner...brilliantly and effervescently subversive.”
— The Gazette (Montreal)

“Ellis is a formidable talent whose wit and insight fit perfectly into the crime genre.”
— Los Angeles Times

“[A] much-needed kick in the butt for a genre that may be more stagnant than its enthusiasts realize.”
— Philadelphia Inquirer

“So funny you may just laugh out loud.”
— Toronto Star

“If you’re looking for an antidote to the stifling formulae of genre fiction, this could be your book.”
— New York magazine

“Get ready for a wonderful kick in the teeth that’ll make you lick your bloody lip with masochistic joy. ”
— Brad Meltzer, New York Times bestselling author of THE BOOK OF FATE and writer of The Justice League series

“Funny, inventive and blithely appalling, this book is Dante on paint fumes.”
— Joss Whedon, creator, writer and director of the Buffy the Vampire Slayer series

“[S]omewhere between the noir of Frank Miller and dark comedy of Chuck Palahniuk.”
— Forbes.com

“There’s at least one surprise, laugh, and genius turn of phrase per page here. ”
— Myspace Books

“CROOKED LITTLE VEIN is a wild, rambling, funny look at the dark alleys of the American sexual landscape.”
— Neal Bohl for Crimespree

“Rich, dark humor and biting look at the world.”
— PopMatters.com

Warren Ellis is one of the most prolific, read, and admired graphic novelists in the world and the creator of Transmetropolitan and The Authority. He lives in southern England with his partner, Niki, and their daughter, Lilith. He never sleeps.