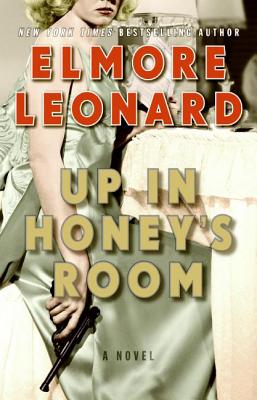 Up in Honey's Room

The odd thing about Walter Schoen, German born but now running a butcher shop in Detroit, he's a dead ringer for Heinrich Himmler, head of the SS and the Gestapo. They even share the same birthday.

Honey Deal, Walter's American wife, doesn't know that Walter is a member of a spy ring that sends U.S. war production data to Germany and gives shelter to escaped German prisoners of war. But she's tired of telling him jokes he doesn't understand--it's time to get a divorce.

Along comes Carl Webster, the hot kid of the Marshals Service. He's looking for Jurgen Schrenk, a former Afrika Korps officer who escaped from a POW camp in Oklahoma. Carl's pretty sure Walter's involved with keeping Schrenk hidden, so Carl gets to know Honey, hoping she'll take him to Walter. Carl then meets Vera Mezwa, the nifty Ukrainian head of the spy ring who's better looking than Mata Hari, and her tricky lover Bohdan with the Buster Brown haircut and a sly way of killing.

Honey's a free spirit; she likes the hot kid marshal and doesn't much care that he's married. But all Carl wants is to get Jurgen Schrenk without getting shot. And then there's Otto--the Waffen-SS major who runs away with a nice Jewish girl. It's Elmore Leonard's world--gritty, funny, and full of surprises.


Praise For Up in Honey's Room…

“When you read Elmore Leonard, you enter Mr. Leonard’s world. A trip like that is its own kind of vacation.”
-New York Times

“Reading UP IN HONEY’S ROOM is like dancing with the stars and Elmore Leonard’s the star.”
-Washington Post

“Bullets fly, but as with most ELmore Leonard novels, things really move when the dialogue gets going. Grade A.”
-Christian Science Monitor

“Proof that (Leonard) is at the top of his game.”
-Seattle Times

“The dialogue flows as fast and smooth as any words ever uttered in the service of a story.”
-Booklist (starred review)

“Elmore Leonard is still at the top of his game.”
-Philadelphia Inquirer

“Leonard’s writing--line by line--is as sharp as ever.”
-Publishers Weekly

“With Dashiell Hammett-type wit (Leonard) has once again created characters who live far beyond their storylines.”
-Boston Globe

“No American author has a better ear for dialogue. Leonard is as straight a shooter as his hot-kid hero.”
-Newsday

“The wisecracks and sexy patter and vivid characters are what make Leonard a guy we’re always happy to see.”
-St. Petersburg Times

“The kind of delicious drama that will keep you coming back for more.”
-Buffalo News

“UP IN HONEY’S ROOM is a fun read. Leonard’s gift for dialogue is as shiny as ever.”
-Vancouver Sun

“So compulsive, so entertaining, so satisfying. Dialogue as imaginative, unpredictable and witty as we have come to expect from Leonard.”
-The Times (London)

“The pacing is fast. The dialogue is dead-on. This is vintage Leonard.”
-Poughkeepsie Journal