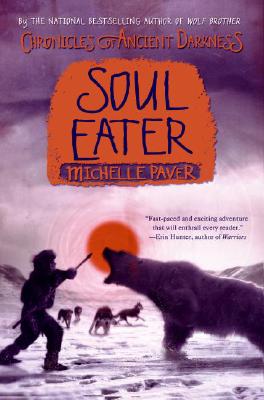 “Fast-paced and exciting adventure that will enthrall every reader.” —Erin Hunter, author of the New York Times bestselling Warriors series

Readers who love the Spirit Animal books will flock to the third volume in Michelle Paver’s bestselling fantasy series about a courageous boy who fights evil alongside a loyal wolf.

It's winter, and Wolf, Torak's beloved pack-brother, has been captured by an unknown foe. In a desperate bid to rescue him, Torak and Renn must brave the frozen wilderness of the Far North.

As they battle for survival amid howling blizzards and the ever-present menace of the great white bear, their friendship is tested to the breaking point, and Torak is forced to get closer to his enemies than ever before.

“Readers will be on the edge of their seats time and again, and definitely eager for the adventures to come.”
— KLIATT

“Readers will be kept on the edge of their chairs…a stirring and thrilling sequel.”
— School Library Journal

“‘Soul Eater’ is perhaps the most thrilling with a satisfyingly twisty plot and some genuine surprises.”
— New York Times Book Review