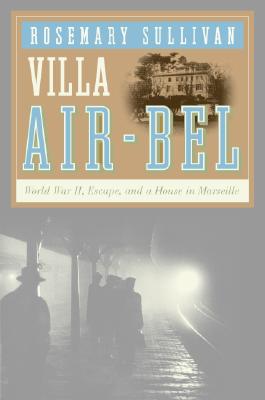 World War II, Escape, and a House in Marseille

France, 1940. The once glittering boulevards of Paris teem with spies, collaborators, and the Gestapo now that France has fallen to Hitler's Wermacht. For André Breton, Max Ernst, Victor Serge, Marc Chagall, Consuelo de Saint-Exupéry, Remedios Varo, Benjamin Péret, and scores of other cultural elite denounced as enemies of the Third Reich, fear and uncertainty define daily life. One wrong glance, one misplaced confidence, could mean arrest, deportation, and death. Their only salvation is the Villa Air-Bel, a château outside Marseille where a group of young people will go to extraordinary lengths to keep them alive.

Financed by the Emergency Rescue Committee, a private American relief organization, unlikely heroes—feisty graduate student Miriam Davenport, Harvard-educated classical scholar Varian Fry, beautiful and compelling heiress Mary Jayne Gold, and brilliant young Socialist and survivor of the Battle of Dunkerque Danny Bénédite and his British wife, Theo—cajole, outwit, and use every means possible to stave off the Nazis and newly installed Vichy government officials circling closer with each passing day. The château was a vibrant artistic salon, home to lively debates and clandestine affairs, to Sunday art auctions and subversive surrealist games. Relationships within the house were tense and arguments were common, but the will to survive kept the covert operation under wraps. Beyond the château's luscious façade war raged, yet hope reverberated within its halls. With the aid of their young rescuers, this diverse intelligentsia—intense, brilliant, and utterly terrified—was able to survive one of the darkest chapters of the twentieth century.

Villa Air-Bel is a powerfully told, meticulously researched true story. Rosemary Sullivan explores the diaries, memoirs, and letters of the individuals involved while uncovering their private worlds and the web of relationships they developed. Filled with suspense, drama, and intrigue, Villa Air-Bel is an excellent work of narrative nonfiction that delves into a fascinating albeit hidden saga in our recent history.


Praise For Villa Air-Bel: World War II, Escape, and a House in Marseille…

“A complex tale showing how hope and courage flourish, even in the toxic soil of totalitarianism.”
— Kirkus Reviews

“Villa Air-Bel is a most welcome book, a triumph of the human spirit”
— Philadelphia Inquirer

“Sullivan has written a book of great detail and complexity, though one that is full of darkness.”
— Quill & Quire

“This is a magnificent, complex narrative of courage, folly, and complacency...a beautifully narrated book.”
— Telegraph

“Her scene-by-scene evocation of life at the house reads like an updated Chekhov comedy laced with horror.”
— Financial Times

“[In Villa Air-Bel] stories are told with passion.”
— The Advocate

“the style is beautifully clear and concise….Sullivan’s book should be mandatory reading.”
— Irish Times

“Deft handling of a twisted plot with a large number of characters.”
— The Forward

ROSEMARY SULLIVAN has written poetry, short fiction, biographies, literary criticism and reviews, and has edited numerous anthologies. Shadow Maker, her biography of Gwendolyn MacEwen, won the Governor General’s Award, the UBC President’s Medal for Canadian Biography and the Toronto Book Award. She has also written biographies of Margaret Atwood and Elizabeth Smart, and the personal memoir The Guthrie Road. Her books include the critically acclaimed Villa Air-Bel, Labyrinth of Desire and Memory-Making, as well as The Space a Name Makes, which won the Gerald Lampert Memorial Award. A professor emeritus at the University of Toronto, Sullivan has been awarded Guggenheim, Camargo and Trudeau Fellowships. In addition, she is a recipient of the Lorne Pierce Medal, awarded by the Royal Society of Canada, for her contribution to Canadian literature and culture. Rosemary Sullivan is an Officer of the Order of Canada.