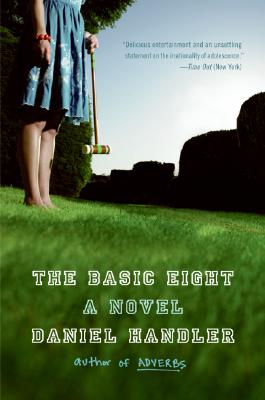 Flannery Culp wants you to know the whole story of her spectacularly awful senior year. Tyrants, perverts, tragic crushes, gossip, cruel jokes, and the hallucinatory effects of absinthe -- Flannery and the seven other friends in the Basic Eight have suffered through it all. But now, on tabloid television, they're calling Flannery a murderer, which is a total lie. It's true that high school can be so stressful sometimes. And it's true that sometimes a girl just has to kill someone. But Flannery wants you to know that she's not a murderer at all -- she's a murderess.

Daniel Handler has written three novels under his own name, including The Basic Eight, Watch Your Mouth, and Adverbs, and many books under the name Lemony Snicket, including All the Wrong Questions, A Series of Unfortunate Events, and the picture book 13 Words.