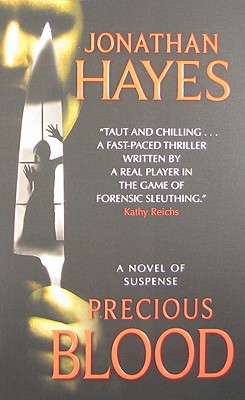 The nightmare of 9/11 left New York City medical examiner Edward Jenner shattered and emotionally scarred. He thought he'd turned away from forensics—and life—for good, but the mutilation murder of a college student is pulling him back. The body of a young woman, nailed to the wall of her East Village apartment, has Jenner convinced that there's a serial killer prowling the city—and a second horrific murder only confirms his most terrible fears. The desperate hunt for a psychopath—and Jenner's troubling obsession with a beautiful, frightened woman who could be the maniac's next victim—is pushing the forensic expert to the limits of his physical and mental endurance.

But as the shadows deepen it gets harder to tell who is the hunter and who is the prey. And which one will live . . . and who will die.

“Even hard-core lovers of the thriller genre may find parts of PRECIOUS BLOOD as shocking as the goriest contemporary slasher films.”
— USA Today

“An intelligent thriller that takes you down the meanest streets . . . This reader was scared to death.”
— Linda Fairstein

“Taut and chilling… a fast-paced thriller written by a real player in the game of forensic sleuthing.”
— Kathy Reichs, author of the bestseller BONES TO ASHES

“An impressive debut . . . The murders are grisly and striking, and Jenner is a likable lead.”
— Romantic Times

Jonathan Hayes, a veteran forensic pathologist, has been a New York City medical examiner, performing autopsies and testifying in murder trials, since 1990. A former contributing editor at Martha Stewart Living, Hayes has written for the New York Times, New York magazine, GQ, and Food & Wine. He is also the author of Precious Blood.