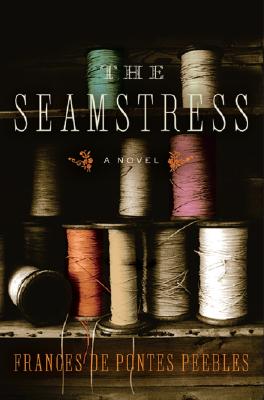 “An epic saga from a talented new writer that will definitely keep you reading. Emilia and Luzia dos Santos are orphaned sisters who are separated by twists of fate, but throughout life they remain connected by heart and mind. This is a brilliant Brazilian 'western'; a great surprise, and, now, one of my favorites of all time.”
— Lillian Kinsey, Bohannons' Books With a Past, Georgetown, KY
View the List

As seamstresses, the young sisters Emília and Luzia dos Santos know how to cut, how to mend, and how to conceal. These are useful skills in the lawless backcountry of Brazil, where ruthless land barons called "colonels" feud with bands of outlaw cangaceiros, trapping innocent residents in the cross fire.

Emília, whose knowledge of the world comes from fashion magazines and romance novels, dreams of falling in love with a gentleman and escaping to a big city.

Luzia also longs to escape their little town, where residents view her with suspicion and pity. Scarred by a childhood accident that left her with a deformed arm, the quick-tempered Luzia finds her escape in sewing and in secret prayers to the saints she believes once saved her life.

But when Luzia is abducted by a group of cangaceiros led by the infamous Hawk, the sisters' quiet lives diverge in ways they never imagined. Emília stumbles into marriage with Degas Coelho, the son of a doctor whose wealth is rivaled only by his political power.

She moves to the sprawling seaside city of Recife, where the glamour of her new life is soon overshadowed by heartache and loneliness. Luzia, forced to trek through scrubland and endure a nomadic existence, proves her determination to survive and begins to see the cangaceiros as comrades, not criminals.

In Recife, Emília must hide any connection to her increasingly notorious sister. As she learns to navigate the treacherous waters of Brazilian high society, Emília sees the country split apart after a bitter presidential election. Political feuds extend to the countryside, where Luzia and the Hawk are forced to make unexpected alliances and endure betrayals that threaten to break the cangaceiros apart. But Luzia will overcome time and distance to entrust her sister with a great secret—one Emília vows to keep. And when Luzia's life is threatened, Emília will risk everything to save her.

An enthralling novel of love and courage, loyalty and adventure, that brings to life a faraway time and place, The Seamstress is impeccably drawn, rich in depth and vision, and heralds the arrival of a supremely talented new writer.


Praise For The Seamstress: A Novel…

“[An] engrossing historical saga. . . . The novel’s true beauty is the exquisitely realized relationship between Emilia and Luzia, two strong women who, despite the separate paths their lives take, remain connected and committed to each other.”
— Library Journal

“THE SEAMSTRESS is a gripping portrait of the lives of two sisters caught in the political unbalance of a country at a crossroads. Bittersweet, beautifully written, this sweeping saga is as impossible to put down as it is to forget.”
— Aryn Kyle, author of THE GOD OF ANIMALS

Frances de Pontes Peebles's short stories have appeared in Indiana Review, Zoetrope: All-Story, and the collection O. Henry Prize Stories, 2005. Born in Pernambuco, Brazil, she is a graduate of the University of Texas at Austin and the Iowa Writers' Workshop. She divides her time between Brazil and Miami.