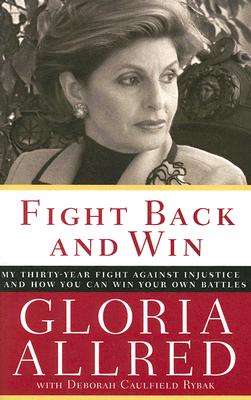 Fight Back and Win (Paperback)

Voted by her peers as one of the best lawyers in America, and described by Time magazine as "one of the nation's most effective advocates of family rights and feminist causes," Allred has devoted her career to fighting for civil rights and has won hundreds of millions of dollars for victims of abuse. She has taken on countless institutions to promote equality, including the Boy Scouts, the Friars Club, and the United States Senate. And as the attorney for numerous high-profile clients—including Nicole Brown Simpson's family, actress Hunter Tylo, and Amber Frey, Scott Peterson's girlfriend—Allred has helped victims assert and protect their rights.

Throughout her memoir, Allred offers colorful—sometimes shocking—examples of self-empowerment from her personal and professional life. Presenting nearly fifty of her most memorable cases, Allred takes us deep inside the justice system to show how it's possible to win even in the face of staggering odds. Her inspiring true stories serve to remind us that winning justice depends on the righ-teousness of the cause and an individual's willingness to stand up, speak out, and fight back. Fight Back and Win is a powerful testament to Gloria Allred's trailblazing career and the battles she has fought alongside countless brave individuals to win justice for us all.

Gloria Allred is the most prominent women's rights attorney in the United States and is one of the highest-profile attorneys in the world. She has been a television commentator on Fox News Channel, CNN, MSNBC, CNBC, and Court TV, and is a three-time Emmy nominee for her television commentary on KABC Television Eyewitness News in Los Angeles. She was rated one of the most important radio talk show hosts in America by USA Today, and has won the President's Award from the National Association of Women Lawyers and the 1986 President's Volunteer Action Award for her work in child support enforcement, presented to her by President Ronald Reagan at the White House. A founding partner in the Los Angeles law firm of Allred, Maroko & Goldberg, Allred lives in Southern California.