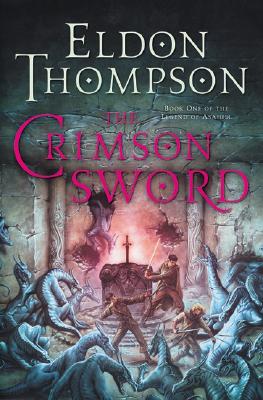 Book One of the Legend of Asahiel

The Age of Man has begun. Gone are the elves and dwarves, orcs and trolls, and other creatures of legend. Having driven the "undesirables" from their lands, the kingdoms of the island continent of Pentania have started a new chapter in human history. The gods are a myth, magic is a forsaken art, and the avatars, shepherds of the races, have faded into the mists of time. Now, mankind will rule. But they are not alone.

When the king of Alson is assassinated and the capital besieged by a nefarious wizard, even the remote village of Diln is not immune from the chaos and terror that sweep the realm. Torn from his home, young Jarom begins a dangerous journey to ask for aid against the implacable usurper.

But soon the machinations of a mysterious council lead Jarom to a seemingly preordained quest: to find one of the mythical Swords of Asahiel, the divine talismans used by the elven avatars in the forging of the earth itself. He must do so not only to establish himself as a leader for his people, but to help save a fledgling, quarrelsome mankind. For the Demon Queen Spithaera has awakened from the Abyss, and humanity is about to learn how very powerless it can be against the ancient terrors of the world.

And whether real or imagined, destiny is not so easily claimed.


Praise For The Crimson Sword: Book One of the Legend of Asahiel…

“This captivating tale will have you turning the pages late into the night.”
— Terry Brooks

“A fast-paced tale from a talented new author whose characters propel you through a terrific adventure. I loved it!”
— John Saul

“A fantastic adventure with fun characters and events that really aren’t what they seem.”
— Robert Newcomb, author of The Scrolls of the Ancients