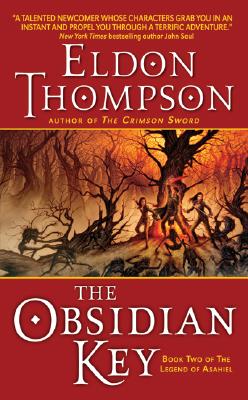 The Obsidian Key (The Legend of Asahiel Series #2)

In battle's fire, young Jarom became Torin, King of Alson, and now must forge his kingdom from the ruins of an empire. But by recklessly reclaiming the Crimson Sword of Asahiel, Torin reopened a dimensional realm no longer sealed by the power of the Obsidian Key. And now the Illysp have emerged from history's darkest hour—foul spirits that possess men's bodies and enslave their souls. With enemies advancing on all sides, Torin must undertake a perilous voyage to unearth the ancient secrets once used to overcome the vile interlopers. Yet even if Torin can somehow miraculously survive, it may already be too late for his devastated land.