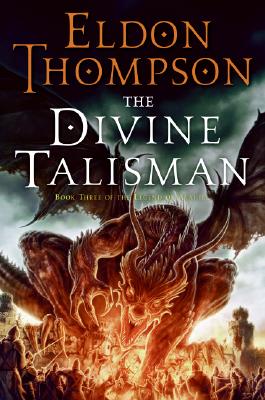 Book Three of the Legend of Asahiel

To protect his people from the demonic Illysp, Torin, king of Alson, made the ultimate sacrifice. Now, as his best friend and his former love seek to salvage the shattered lands beyond their borders, a treacherous assault costs them their most powerful weapon—the fabled Crimson Sword.

Hopelessly outmatched, Pentania's citizens must fight to flee their conquered homeland or else perish. Yet an even greater threat looms, for the Leviathan has been awakened, an unfathomable creature whose wrath could single-handedly destroy the entire world.

Hope—if any remains—lies in the efforts of a lone elf, a mad witch, and a fallen hero charged with unraveling a series of divine riddles. Yet to do so they must first find a way to break the very bonds of fiendish possession. . . .


Praise For The Divine Talisman: Book Three of the Legend of Asahiel…

“Written in a cinematic style, here is a novel both intimate in detail, yet breathaking in scope. It’s a brilliant odyssey that stays with you long after you turn the last page. I envy those who haven’t discovered this world yet.”
— --James Rollins, New York Times bestselling author of The Judas Strain