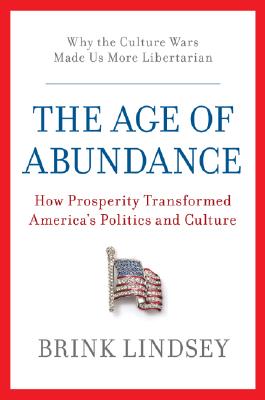 The Age of Abundance

Until the 1950s, the struggle to feed, clothe, and employ the nation drove most of American political life. From slavery to the New Deal, political parties organized around economic interests and engaged in fervent debate over the best allocation of agonizingly scarce resources. But with the explosion of the nation's economy in the years after World War II, a new set of needs began to emerge—a search for meaning and self-expression on one side, and a quest for stability and a return to traditional values on the other.

In The Age of Abundance, Brink Lindsey offers a bold reinterpretation of the latter half of the twentieth century. In this sweeping history of postwar America, the tumult of racial and gender politics, the rise of the counterculture, and the conservative revolution of the 1980s and 1990s are portrayed in an entirely new light. Readers will learn how and why the contemporary ideologies of left and right emerged in response to the novel challenges of mass prosperity.

The political ideas that created the culture wars, however, have now grown obsolete. As the Washington Post aptly summarized Lindsey's take on the contradictions of American politics, "Republicans want to go home to the United States of the 1950s while Democrats want to work there." Struggling to replace today's stale conflicts is a new consensus that mixes the social freedom of the left with the economic freedom of the right into a potentially powerful ethos of libertarianism. The Age of Abundance reveals the secret formula of this remarkable alchemy. The book is a breathtaking reevaluation of our recent past—and will change the way we think about the future.


Praise For The Age of Abundance: How Prosperity Transformed America's Politics and Culture…

“Here is one of the freshest and most thought-provoking books on recent American history to appear in years.”
— Adrian Wooldridge, co-author of The Right Nation: Conservative Power in America

“Shows us how great an achievement our economy is-it reshaped our society and our culture, for better and worse.”
— Michael Barone, Senior Writer, U.S. News & World Report and co-author, The Almanac of American Politics

“In The Age of Abundance, Brink Lindsey provides an admirable-and much needed-model of rational, respectful, readable political argument.”
— Virginia Postrel, Author, The Substance of Style

“In an age of abundance, the libertarian moment may have arrived, trumping the old division between left and right.”
— Douglas S. Massey, Henry G. Bryant Professor of Sociology and Public Affairs, Princeton University and author of Return of the "L" Word: A Liberal Vision for the New Century

“An engaging argument that, probably better than any other, explains much of how we’ve arrived at our current past.”
— Fred Siegel, The City Journal

“Lindsey’s basic argument is fresh and provocative and his insights are frequently dazzling.”
— Los Angeles Times

Brink Lindsey is vice president for research at the Cato Institute. He is the author of Against the Dead Hand: The Uncertain Struggle for Global Capitalism, which the Wall Street Journal called "compelling" and "excellent" and the Economist declared was "full of elegantly argued good sense." His articles have appeared in numerous leading newspapers and opinion magazines such as the Wall Street Journal, Financial Times, The New Republic, and the National Review. He lives with his family near Washington, D.C.