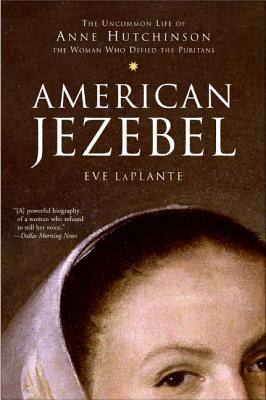 The Uncommon Life of Anne Hutchinson, the Woman Who Defied the Puritans

In 1637, Anne Hutchinson, a forty-six-year-old midwife who was pregnant with her sixteenth child, stood before forty male judges of the Massachusetts General Court, charged with heresy and sedition. In a time when women could not vote, hold public office, or teach outside the home, the charismatic Hutchinson wielded remarkable political power. Her unconventional ideas had attracted a following of prominent citizens eager for social reform. Hutchinson defended herself brilliantly, but the judges, faced with a perceived threat to public order, banished her for behaving in a manner "not comely for [her] sex."

Written by one of Hutchinson's direct descendants, American Jezebel brings both balance and perspective to Hutchinson's story. It captures this American heroine's life in all its complexity, presenting her not as a religious fanatic, a cardboard feminist, or a raging crank—as some have portrayed her—but as a flesh-and-blood wife, mother, theologian, and political leader. The book narrates her dramatic expulsion from Massachusetts, after which her judges, still threatened by her challenges, promptly built Harvard College to enforce religious and social orthodoxies—making her the mid-wife to the nation's first college. In exile, she settled Rhode Island, becoming the only woman ever to co-found an American colony.

The seeds of the American struggle for women's and human rights can be found in the story of this one woman's courageous life. American Jezebel illuminates the origins of our modern concepts of religious freedom, equal rights, and free speech, and showcases an extraordinary woman whose achievements are astonishing by the standards of any era.


Praise For American Jezebel: The Uncommon Life of Anne Hutchinson, the Woman Who Defied the Puritans…

“[A] powerful biography of a woman who refused to still her voice.”
— Dallas Morning News

“What true heroes can I tell my students about? …read LaPlante’s biography to make [Hutchinson] and her courage come alive.”
— --Howard Zinn, author of A People's History of the United States

“...charming exploration of the life and times of Anne Hutchinson....A personal and appreciative tribute.”
— --Edwin Gaustad, author (with Leigh E. Schmidt) of A Religious History of America

“[t]he most significant woman in pre-Revolutionary America...rescued from obscurity and re-introduced to 21st Century America.”
— Peter J. Gomes, author of The Good Life

“This book is New England history at its best....it carries with it a message for today as well.”.”
— --Michael Dukakis, former Governor of Massachusetts

“American Jezebel is stunning book, exquisitely written, it fills in a crucial piece of American history.”
— --Carol Gilligan, author of In A Different Voice and The Birth of Pleasure

“Fast-paced and elegant...LaPlante’s first-rate biography offers glimpses into the life and teachings of a much-neglected figure.”
— Publishers Weekly (starred review)

“[Hutcinson’s] legacy lives on, and American Jezebel comes as a timely reminder of the causes she held dear:”
— BookPage

““Remarkably successful... traces the vein of an ongoing ambivalence about powerful public women in America... particularly good on the sexual mores of the Puritans...”
— --Laura Miller, salon.com

“The most full-scale biography of Hutchinson to date, and a readable, useful account of the challenges women faced...diligently researched and well-crafted.”
— Minneapolis Star Tribune

“A new biography well worth reading... Anne Hutchinson is among the most-neglected, most important figures in United States history.”
— --Nick Gillespie, Reason Magazine

Eve LaPlante, a sixth great-granddaughter of Samuel Sewall, is the author of two previous critically acclaimed books: American Jezebel, a biography of her ancestor Anne Hutchinson, and Seized, a narrative portrait of temporal lobe epilepsy. LaPlante has degrees from Princeton and Harvard and has written for The Atlantic, the New York Times, Ladies' Home Journal, and Boston magazine. She lives with her family in New England on land once owned by Judge Sewall.