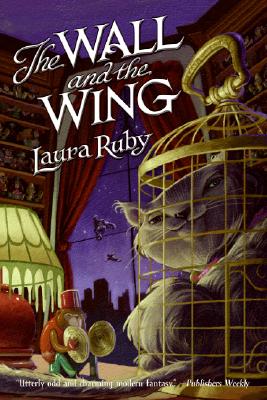 The Wall and the Wing

A few, nicknamed leadfeet, are forced to forever spend their lives closer to the ground. But one night, a girl named Gurl--a leadfoot, an orphan, a nobody--discovers that she can do something much better than fly.

She can become invisible.

Along with a new friend, a boy named Bug, Gurl begins a quest that takes her on a wild ride through the magical city, all the way to the handsome but lethal Sweetcheeks Grabowski--the gangster who holds the key to Gurl's past . . . and the world's future.


Praise For The Wall and the Wing…

“Fast-paced wackiness told with humor, often black, that will have young readers giggling even as they cheer.”
-School Library Journal

“No need to compare to Harry Potter; with The Wall and the Wing, American fantasy takes full flight.”
-Esme Raji Codell, author of Educating Esme and The Diary of a Fairy Godmother

“A most engaging read.”
-Bookseller (London)

“Intriguing, offbeat fantasy. Readers will look forward to the upcoming sequel.”
-ALA Booklist

“A wonderful combination of the buddy novel and pure fantasy. An excellent adventure, smartly written and wholly original.”
-www.bookslut.com