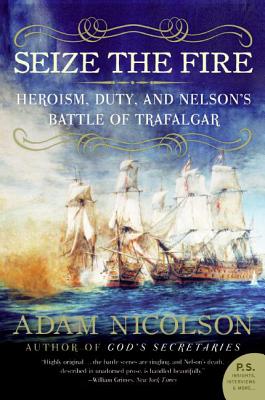 Adam Nicolson takes the great naval battle of Trafalgar, fought between the British and Franco-Spanish fleets in October 1805, and uses it to examine our idea of heroism and the heroic. A story rich with modern resonance, Seize the Fire reveals the economic impact of the battle as a victorious Great Britain emerged as a global commercial empire.

Nicolson not only vividly describes describes the brutal realities of battle but enters the hearts and minds of the men who were there. HIs masterful history is a portrait of a moment, a close and passionately engaged depiction of a frame of mind at a turning point in world history.


Praise For Seize the Fire: Heroism, Duty, and Nelson's Battle of Trafalgar…

“The reader will find nothing dull about this sparkling work...majestic, poetic and, at base, authentic.”
— Literary Review

“Vibrant and welcome addition to the admittedly already large library of Nelsonia.”
— Jonathan Bouquet, The Observer

“A well-reasoned transoceanic rejoinder to Freeman’s Affairs of Honor, and a pleasure for fans of Aubrey and Hornblower.”
— Kirkus Reviews

“Bold and provocative...Nicolson’s book stands out from amongst its rivals.”
— Sunday Telegraph

“argued with vigour and written with grace, it is an illuminating piece of interpretive cultural history.”
— Sunday Times (London)

“Nicolson’s eye for detail creates a compelling readability.”
— The Spectator

“full of suspense and vivid, raw descriptions of the butchery...sublime writing”
— The Scotsman

“Of the books marking the bicentenary of...Trafalgar, Adam Nicolson’s can claim to be one of the most original”
— The Week

“strikingly original...Mr. Nicolson brings to life superbly the horror, devastation and gore of Trafalgar.”
— The Economist

“Nicolson brilliantly characterises each navy - British, French, Spanish - as an expression of the countries to which they belonged...vivid”
— Country Life

“Seize the Fire...is so ripping I faced the classic ocean-voyage quandary. Halfway through, my supply of pages dwindling, I started to ration...stirring, vividly written book.”
— Independent on Sunday

“So ripping I faced the classic ocean-voyage quandary. Halfway through, my supply of pages dwindling, I started to ration.”
— David Lipsky, New York Times Book Review

“A masterly reconstruction of this event.”
— Christopher Hitchens, Atlantic Monthly

Adam Nicols on is the author of Seamanship, God's Secretaries, and Seize the Fire. He has won both the Somerset Maugham and William Heinemann awards, and he lives with his family at Sissinghurst Castle in England.