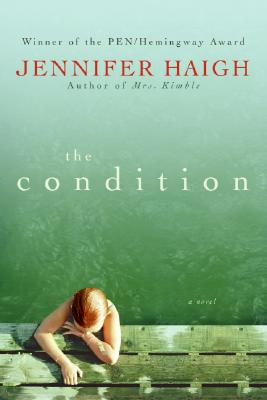 “Set in New England, The Condition realistically portrays the story of a family undergoing separation as they face their only daughter Gwen's diagnosis of Turner's syndrome, a condition that prevents puberty from occurring. Twenty years later, the family is shaken when Gwen, now a young adult, falls in love. There are endless possibilities for book club discussion in Haigh's insightfully written novel, in which family ties are both limiting and liberating.”
— Jane Glaser, Next Chapter Bookshop, Mequon, WI
View the List

“Jennifer Haigh's latest book is the intimate story of a New England family, beginning one idyllic summer on Cape Cod, before their life changes suddenly. Twenty years later their story picks up again and you get to know each member of the family, what motivates them, and how they communicate -- or don't -- with each other. I loved this book.”
— Kym Havens, Wellesley Booksmith, Wellesley, MA
View the List

The Condition tells the story of the McKotches, a proper New England family that comes apart during one fateful summer. The year is 1976, and the family, Frank McKotch, an eminent scientist; his pedigreed wife, Paulette; and their three beautiful children has embarked on its annual vacation at the Captain's House, the grand old family retreat on Cape Cod. One day on the beach, Frank is struck by an image he cannot forget: his thirteen-year-old daughter, Gwen, strangely infantile in her child-sized bikini, standing a full head shorter than her younger cousin Charlotte. At that moment he knows a truth that he can never again unknown something is terribly wrong with his only daughter. The McKotch family will never be the same.

Twenty years after Gwen's diagnosis with Turner's syndrome, a genetic condition that has prevented her from maturing, trapping her forever in the body of a child, all five family members are still dealing with the fallout. Each believes himself crippled by some secret pathology; each feels responsible for the family's demise. Frank and Paulette are acrimoniously divorced. Billy, the eldest son, is dutiful but distant, a handsome Manhattan cardiologist with a life built on compromise. His brother, Scott, awakens from a pot-addled adolescence to a soul-killing job, a regrettable marriage, and a vinyl-sided tract house in the suburbs. And Gwen is silent and emotionally aloof, a bright, accomplished woman who spurns any interaction with those around her. She makes peace with the hermetic life she's constructed until, well into her thirties, she falls in love for the first time. And suddenly, once again, the family's world is tilted on its axis.

Compassionate yet unflinchingly honest, witty and almost painfully astute, The Condition explores the power of family mythologies, the self-delusions, denials, and inescapable truths that forever bind fathers and mothers and siblings.


Praise For The Condition…

“[Haigh] looks unflinchingly at family ties—the kind that limit and the kind that can actually liberate. The Condition is a satisfying feat of literary choreography.”
-Wall Street Journal

“Haigh’s characters are layered and authentic. Moreover, one would have to have a heart of stone not to care for them and follow their small sagas. . . . Haigh is such a gifted chronicler of the human condition.”
-Chris Bohjalian, Washington Post Book World

“THE CONDITION is something rare. . . . Ms. Haigh has a great gift for telling interwoven family stories and doing justice to all the different perspectives they present. . . . A remarkable accomplishment.”
-Janet Maslin, New York Times Book Review

“Poignant. . . . A strong nod to the healing power of love.”
-Publishers Weekly

“Jennifer Haigh illuminates the dark tangle of desire and deed that is the family, that crucible we so often yearn to flee yet keep coming back to again and again. THE CONDITION is unsentimental, compelling, and moving, and I urge you to read it!”
-Andre Dubus III, New York Times bestselling author of the National Book Award finalist House of Sand and Fog

“The ailment at the center of this remarkable novel is the human condition itself. Jennifer Haigh has written a sprawling, emotionally gripping account of one family’s troubled history, enlivened by her formidable intelligence and deep insight into her characters’ hearts and minds.”
-Tom Perrotta, New York Times bestselling author of Little Children and Election