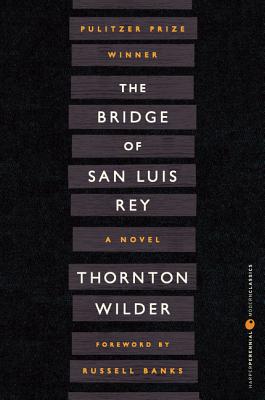 “The essence of Mr. Wilder’s book is really the feeling in it; it is a ‘notation of the heart’ with sympathy. Gaily or sadly, but always with understanding, a belief in the miracle of love runs through it all.” —Times Literary Supplement (London)

"On Friday noon, July the twentieth, 1714, the finest bridge in all Peru broke and precipitated five travelers into the gulf below." With this celebrated sentence Thornton Wilder begins The Bridge of San Luis Rey, winner of the Pulitzer Prize, one of the towering achievements in American fiction, and a novel beloved throughout the world.

By chance, a monk witnesses the tragedy. Brother Juniper then embarks on a quest to prove that it was divine intervention rather than chance that led to the deaths of those who perished in the tragedy. His search leads to his own death—and to Wilder’s timeless investigation into the nature of love and the meaning of the human condition.

This edition includes a foreword by acclaimed author Russell Banks and features previously unpublished notes and other illuminating documentary material about the novel and author.


Praise For The Bridge of San Luis Rey…

“A remarkably confident evocation of the secret springs of half a dozen men, women and children. . . . A very beautiful book.”
— The Nation

“It is a subtle idea admirably worked out and leaves a vivid impression of society in the golden age of the most aristocratic capital of Latin America. The histories of the five people are told perfectly with sympathy and insight.”
— New Statesman

“The essence of Mr. Wilder’s book is really the feeling in it; it is a ‘notation of the heart’ with sympathy. Gaily or sadly, but always with understanding, a belief in the miracle of love runs through it all.”
— Times Literary Supplement (London)