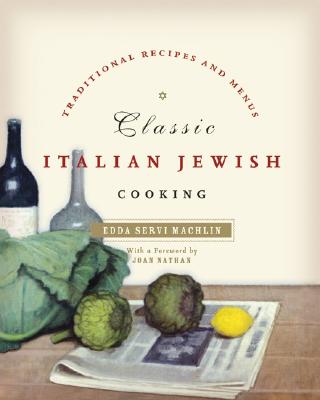 Classic Italian Jewish Cooking starts with the ancient Italian adage Vesti da turco e mangia da ebreo ("Dress like a Turk and eat like a Jew"). In this definitive volume of Italian Jewish recipes, Edda Servi Machlin, a native of Pitigliano, Italy, a Tuscan village that was once home to a vibrant Jewish community, reveals the secrets of this delicate and unique culinary tradition that has flourished for more than two thousand years.

Originally introduced into the region by Jewish settlers from Judea, other Middle Eastern countries, and North Africa, Italian Jewish cuisine was always more than a mere adaptation of Italian dishes to the Jewish dietary laws; it was a brilliant marriage of ancient Jewish dishes and preparation methods to the local ingredients that relied on the imaginative use of fresh herbs, fruit, and vegetables. Fifteen hundred years later, with the influx of Iberian refugees, it was enriched by some Sephardic (from Spain and Portugal) dishes.

Selected from Edda Servi Machlin's three widely admired books on Italian Jewish cuisine and filled with beautifully rendered memories from her birthplace, this rare collection of more than three hundred recipes is a powerful tribute to a rich cultural heritage and a rare gift to food lovers. With a special section on Jewish holiday menus, Classic Italian Jewish Cooking is a volume to treasure for generations.

“…anyone who cares about regional Italian cooking will be fascinated by Machlin’s lovely and evocative picture of the cuisine of a world lost to the ravages of war.”
-Epicurious.com