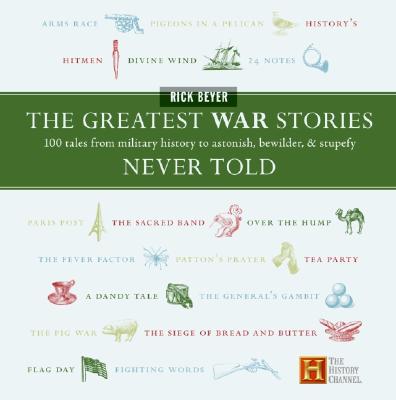 Search the annals of military history and you will discover no end of quirky characters and surprising true stories: The topless dancer who saved the Byzantine Empire. The World War I battle that was halted so a soccer game could be played. The scientist who invented a pigeon-guided missile in 1943. And don't forget the elderly pig whose death triggered an international crisis between the United States and Great Britain.

This is the kind of history you'll find in The Greatest War Stories Never Told. One hundred fascinating stories drawn from two thousand years of military history, accompanied by a wealth of photographs, maps, drawings, and documents that help bring each story to life. Little-known tales told with a one-two punch of history and humor that will make you shake your head in disbelief -- but they're all true!

Did You Know That:

Discover how war can be a catalyst for change; an engine for innovation; and an arena for valor, deceit, intrigue, ambition, revenge, audacity, folly, and even silliness. Want to know how the mafia helped the United States win World War II, when the word bazooka was coined, or how Silly Putty was invented? Read on!

“The obscure secrets that Beyer reveals are fascinating in all the ways that history books generally aren’t—quirky and entertaining without being drawn out....A quick read that you’ll be drawing into conversation forever.”
— The Army Times

Rick Beyer is the author of the popular Greatest Stories Never Told book series, and an award-winning documentary filmmaker whose work has been seen on The History Channel, A&E, and National Geographic Channel. He is also an accomplished speaker who inspires and entertains audiences around the country. He lives with his wife in Lexington, Massachusetts.