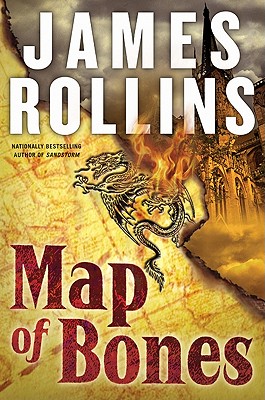 The bestselling master of astonishing adventure James Rollins delivers his most relentlessly exciting page-turner to date—a gripping and explosive novel of an ancient conspiracy to create a terrifying new world order out of the ashes of modern civilization.

The crime is inhumanly cruel with horrific consequences both unthinkable and inevitable. During a service at a cathedral in Cologne, Germany, a band of armed intruders dressed in monks' robes unleash a nightmare of blood and terror, ruthlessly gunning down worshippers and clergy alike. The killers haven't come for the church's gold and valuable artwork, but for a priceless treasure secreted within: the preserved bones of the Three Magi who once came to pay homage to a newborn savior. As they flee the carnage they have wrought, they carry a prize that could reshape the world.

The Vatican is in turmoil, and Lieutenant Rachel Verona of Rome's carabinieri is assigned to lead the investigation. But no ordinary police organization alone can deal with the bizarre theft and massacre, and SIGMA Force—an elite covert arm of the U.S. Defense Department—is called in under the command of Grayson Pierce. New to SIGMA, Pierce assembles a crack team of scientific and Special Forces operatives to unravel the mystery of the stolen bones, and together they set out on a twisting trail through a labyrinth of clues and dark revelations that carry them to the sites of the Seven Wonders of the World—and to the doorstep of the mystical and terrifying Dragon Court.

An ancient, secret fraternity of alchemists and assassins, the master-adepts of the Dragon Court have plans for the sacred remains that will alter the future of humankind in devastating ways that only the maddest of zealots could desire—and they will let nothing and no one stand in their way. Suddenly Pierce, Verona, and the SIGMA team are the hunted as well as the hunters, forced to use every skill they possess to survive as they follow the bones to the ultimate confrontation between darkness and light—in a lost place of history where science and religion will unite to unleash a horror not seen since the beginning of time.

A masterful novel that combines the exhilarating mysticism of The Da Vinci Code with the pulse-pounding action of a Tom Clancy thriller, James Rollins's Map of Bones is destined to be a modern classic that will stand among the very best adventure tales ever written.