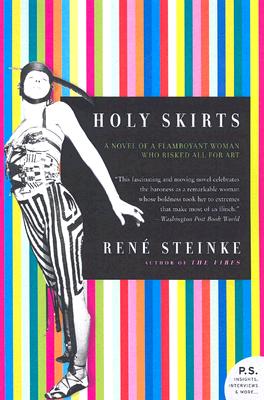 A Novel of a Flamboyant Woman Who Risked All for Art

No one in 1917 New York had ever encountered a woman like the Bar-oness Elsa von Freytag-Loringhoven -- poet, artist, proto-punk rocker, sexual libertine, fashion avatar, and unrepentant troublemaker. When she wasn't stalking the streets of Greenwich Village wearing a brassiere made from tomato cans, she was enthusiastically declaiming her poems to sailors in beer halls or posing nude for Man Ray or Marcel Duchamp. In an era of brutal war, technological innovation, and cataclysmic change, the Baroness had resolved to create her own destiny -- taking the center of the Dadaist circle, breaking every bond of female propriety . . . and transforming herself into a living, breathing work of art.


Praise For Holy Skirts: A Novel of a Flamboyant Woman Who Risked All for Art…

“Steinke shows palpable admiration and respect for her proto-feminist protagonist. This is an intelligent, spirited work that stimulates interest in the baroness’s work and times.” — Publishers Weekly

“Steinke is a consummate prose stylist. She has a poet’s ear for words....” — BookForum

“Steinke’s graceful prose adds intimate texture to a woman so cutting-edge that Duchamp called her ‘the future.’” — Entertainment Weekly

“Steinke’s book reminds us why Elsa’s frenetic, avant-garde world is worth remembering.” — Time Out New York

“Steinke has drawn a fully realized character whose Dadaist impulses, even though the filter of time and fiction, still startle.” — Chicago Tribune

René Steinke is the author of The Fires. She is the editor in chief of The Literary Review and teaches creative writing at Fairleigh Dickinson University. She lives in Brooklyn, New York.