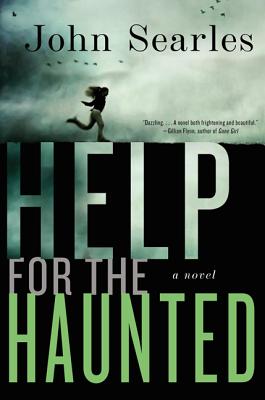 Help for the Haunted (Hardcover)

John Searles’s Help for the Haunted is an unforgettable story of a most unusual family, their deep secrets, their harrowing tragedy, and ultimately, a daughter’s discovery of a dark and unexpected mystery.

Sylvie Mason’s parents have an unusual occupation—helping “haunted souls” find peace. After receiving a strange phone call one winter’s night, they leave the house and are later murdered in an old church in a horrifying act of violence.

A year later, Sylvie is living in the care of her older sister, who may be to blame for what happened to their parents. Now, the inquisitive teenager pursues the mystery, moving closer to the knowledge of what occurred that night—and to the truth about her family’s past and the secrets that have haunted them for years.

Capturing the vivid eeriness of Stephen King’s works with the compelling quirkiness of John Irving’s beloved novels, Help for the Haunted is that rare story that brings to life a richly imagined and wholly original world.

John Searles is the author of the bestsellers Boy Still Missing and Strange but True. He appears as a book critic on NBC's Today Show, and his essays have been published in the New York Times and Washington Post. He has a master's degree in creative writing from New York University and lives in New York City.


Praise For Help for the Haunted: A Novel…

“John Searles wrapped a ghost story inside a mystery, and the result is a worthy thriller...HELP FOR THE HAUNTED’s alternating chapters are cleverly split in time to reveal what came before and after a deadly tragedy at the heart of this captivating story.”
— Minneapolis Star Tribune

“The perfect Halloween read for those with a taste for haunted basements, creepy always-smiling dolls, and weirdly dysfunctional families...Searles brings the torture of adolescence, the scourge of notoriety, and the pain of being young and different vividly to the page.”
— Boston Globe

“A dazzling, dark portrait of a troubled family beset by the supernatural. Searles ratchets up the tension with every passing chapter, and delivers authentic and well-earned scares--all written through the lens of a lonely teenager searching for answers. The result is a novel both frightening and beautiful.”
— Gillian Flynn

“Creepy, disturbing and compelling, with well-drawn characters, this is gothic suspense at its finest.”
— Statesman Journal (Oregon)

“[Searles] has crafted a strange, spooky world that is absolutely believable. Sweet, precocious, desperate Sylvie is a memorable young striver in the tradition of Scout Finch, and HELP FOR THE HAUNTED is an exceptional piece of storytelling.”
— Washington Post

“A poignant story of a family, of parents navigating an odd and dangerous career, of daughters shaken by doubt and loss and grief — and the gulf that widens between them all...A compelling mystery.”
— Miami Herald

“A rich and tense suspense story that serves up plenty of genuine thrills but also moves the reader with elegant insights into the enigma that is Family.”
— Khaled Hosseini, bestselling author of And the Mountains Echoed and The Kite Runner

“Readers of this unsettling coming-of-age story from Searles may feel the need to whistle past the graveyard at the end...[Events] unfold in nonlinear fashion, keeping the reader on edge while Sylvie bravely uncovers her family’s many secrets.”
— Publishers Weekly (starred review)

“The family demons are more troubling than the supernatural ones in John Searles’ new novel...Sylvie’s flashbacks and exploration of her mom and dad’s relationship will haunt readers’ hearts after they turn the final page.”
— USA Today

“[Searles’] new release about a young girl whose parents are self-proclaimed ‘saviors of haunted souls,’ his his most engrossing yet.”
— People

“[HELP FOR THE HAUNTED] is no simple ghost story...As the story zips back and forth through time, it’s rarely clear what’s real and what’s not, though one thing is for sure: The “literal” bedevilment the Masons cast from other houses is nothing compared to what’s in their own.”
— Chicago Magazine

“An expertly-wrought, coming-of-age story with a healthy dose of creepiness.”
— Amazon.com, "Best Book of the Month"

“Moving and elegantly constructed...both a suspenseful page turner and a provocative look at what it means to be haunted.”
— Columbus Dispatch

“A quickly paced and boldly rendered ghost story, Searles’s dark novel about a young girl haunted by the murder of her parents had me up reading all night. And checking the doors. I found it impossible to put down.”
— Sara Gruen, bestselling author of Water for Elephants and Ape House

Searles successfuly jumps back and forth in time to let these stories unfold, sewing clues and strange details along hte way...A somber, well-paced journey, wrappe din a mysery, that will keep readers guessing until the revealing conclusion.
— Kirkus Reviews

“I was completely consumed by Help for the Haunted; I read it in one sitting. I just can’t decide what I loved the most: its perfectly pitched teenage narrator; the ghost story that kept me riveted; the thriller that made me say, Oh, just one more chapter.”
— Jodi Picoult, New York Times-bestselling author of Lone Wolf and The Storyteller

“This is edge-of-your-seat reading of a very high quality, and, be warned, it is seriously spine-tingling.”
— Robert Goolrick, bestselling author of A Reliable Wife

“Wonderful...A coming of age tale that is poignant and touching...and will scare the living hell out of you. I loved every page of this novel: I loved the sisters and the story and the page-turning mystery. I just may never go downstairs into my basement again.”
— Chris Bohjalian, bestselling author of Midwives and The Light in the Ruins

“Searles is a top-notch storyteller. He sets a mood of unease that builds up to a sense of dread... It’s hard to stop reading.”
— Charlotte Observer

“Involves both classic horror elements (a malevolent rag doll, a stolen diary, a hatchet, a scary basement) and contemporary ones (a prescription for Vicodin). Searles controls the plot with a sure hand and wraps up the situation on Butter Lane in a satisfying and believable way.”
— New York Newsday

“Full of terror, totally compelling, believable, and ghostly chilling...The horror that stocks this page-turner is so adroitly grounded in things ordinary and real that the reader almost suspends disbelief and comes to think that maybe there are malevolent spirits out there.”
— NPR