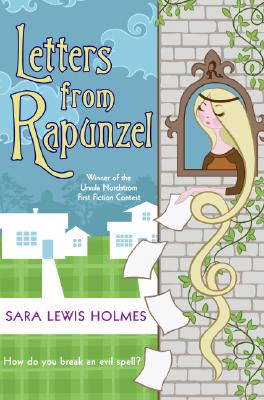 Once upon a time, there was a girl. Let's call her Rapunzel. A modern-day version. Abandoned. Alone. Waiting for her hair to grow and dreaming of a way to escape from her tower. She was trapped, you see. Not in the conventional fairy-tale way—this was the dreaded after-school Homework Club. A desolate place, where no gum could be chewed, and where Rapunzel sat day after day, cursing the evil spell that had been cast over her father. The doctors called it something else, but a true heroine can smell an evil spell a mile away. So when a mysterious letter addressed to P.O. Box #5667 falls into her hands, she knows she's found the pea under her mattress. But since when is finding happily ever after as simple as Just Writing Back?

Winner of the Ursula Nordstrom Fiction Contest, Sara Lewis Holmes's enchanting debut novel is a breath of fresh air. Told through letters, with a liberal sprinkling of fairy dust, Rapunzel's quest for a happy ending gives every reader something to believe in.


Praise For Letters from Rapunzel…

“A bright , capable character leaves readers with the wisdom that one must rescue oneself before rescuing others.”
-School Library Journal

“Delicately layered grace and springiness. An original story.”
-Bulletin of the Center for Children’s Books