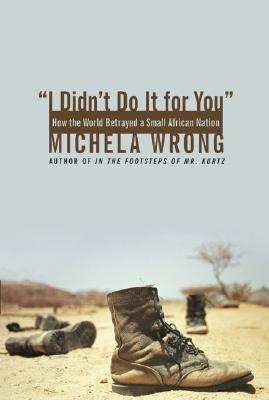 I Didn't Do It for You

How the World Betrayed a Small African Nation

Scarred by decades of conflict and occupation, the craggy African nation of Eritrea has weathered the world's longest-running guerrilla war. The dogged determination that secured victory against Ethiopia, its giant neighbor, is woven into the national psyche, the product of a series of cynical foreign interventions. Fascist Italy wanted Eritrea as the springboard for a new, racially pure Roman empire, Britain sold off its industry for scrap, the United States needed a base for its state-of-the-art spy station, and the Soviet Union used it as a pawn in a proxy war.

Michela Wrong reveals the breathtaking abuses this tiny nation has suffered and, with the sharp eye for detail and taste for the incongruous that was the hallmark of her account of Mobutu's Congo, tells the story of colonialism itself. Along the way, we meet a formidable African emperor, a pigheaded English suffragette, and a guerrilla fighter who taught himself French cuisine in the bush.

Michela Wrong tells this devastating but important story with exemplary clarity. The way international power politics can play havoc with a country's destiny gives the story of Eritrea a resonance and a tragic dimension beyond imagining.


Praise For I Didn't Do It for You: How the World Betrayed a Small African Nation…

“Engaging history . . . A vivid story of a nation repeatedly trampled by foreign powers until it won its independence.”
— New York Times Book Review

“Contemporary history on the grand scale. I was entertained, informed and angered . . . A splendid achievement.”
— John le Carré

“Vivid, penetrating, wonderfully detailed. Michela Wrong...has excavated the very heart and soul of the Eritrean people and their country.”
— Aminatta Forna, author of THE DEVIL THAT DANCED ON WATER

“Engrossing, vividly written in the style of the best thrillers...It should become the standard work on the region.”
— Anthony Sampson, author of MANDELA: The Authorized Biography

“A highly readable, well-researched depiction of the region’s serial exploitation by a parade of foreign predators.”
— Washington Post Book World

“With rich prose and the passion she brings to the subject of [Eritrea’s] independence... Wrong provides a very readable journalistic.”
— Los Angeles Times

“An engaging read... Devastating detail... This is probably the best book that could be written about Eritrea.”
— Nation

“If you want to understand the world...I DIDN’T DO IT FOR YOU provides the best starting point.”
— The Progressive

Michela Wrong has worked as a foreign correspondent for Reuters, the BBC, and the Financial Times. She has written about Africa for Slate.com and is a frequent commentator on African affairs in the media. Her first book, In the Footsteps of Mr. Kurtz, won the James Stern Silver Pen Award for Nonfiction. She lives in London.