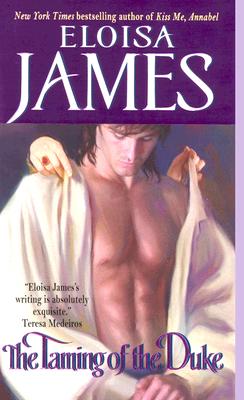 The Taming of the Duke (Essex Sisters #3)

Imogen, Lady Maitland, has decided to dance on the wild side. After all, she's in the delicious position of being able to take a lover. A discreet male who knows just when to leave in the morning.

But Lady Maitland is still under the watchful eye of her former guardian, the wildly untamed Rafe, the Duke of Holbrook. He believes she is still in need of a "watchdog." She laughs at the idea that someone so insufferably lazy and devoted to drink can demand that she behave with propriety.

It's Rafe's long-lost brother, a man who looks precisely like the duke but with none of his degenerate edge, who interests Imogen. To Imogen, he's the shadow duke . . . the man who really should hold the title. But when Imogen agrees to accompany Gabe to a masquerade...whose masked eyes watch her with that intense look of desire? Who exactly is she dancing with? The duke or the shadow duke? Rafe . . . or Gabe?