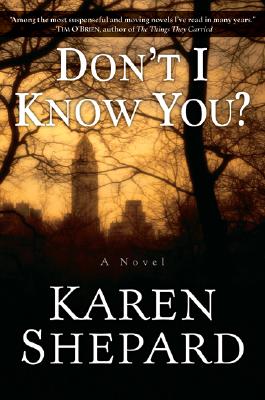 Don't I Know You?

Multiple lacerations and stab wounds. No evidence of forced entry. The possibility of sexual assault. Crimes such as these are almost always committed by someone the victim knows well.

In 1976 in New York City, Gina Engel was murdered in her front hall. The police believed the victim had known her attacker. But they had few suspects, and as time went on, the case remained unsolved. Yet the suspicions of those who knew Gina both intimately and from a distance continue to plague them.

Gina's son, Steven, discovered the body and caught only a fleeting glimpse of the killer as he fled. If only, he wonders again and again. As Lily Chin prepares for her upcoming wedding, her life is irrevocably changed when a mysterious woman appears to inform her of her fiance's secret life -- a life that may have included Gina Engel. And more than a decade later Louise Carpanetti, the woman who received a call from the dying Gina, finally acknowledges that her own emotionally disturbed son may have committed the gruesome murder. As long as the murderer's identity remains a mystery, all three must forever call into question the nature of the people closest to them.

Don't I Know You? is an intricate and devastating psychological drama told in three separate but interconnected narratives. Together those narra-tives unfold into a mystery that absorbs and thrills, and lay out an examination of the human heart that is quietly dazzling in its emotional intelligence and elegant understatement. Shepard's vision of how a murder's effect reverberates outward inspires us to understand the limitations of intimate knowledge and the extraordinary capacities of the people we think we know best, even as it shows us how we repair those bonds and prepare ourselves to go on.


Praise For Don't I Know You?…

"A chilly, disquieting mystery in which the answer to the title is always 'no.'"
-Ron Hansen, author of Mariette in Ecstasy and the National Book Award finalist Atticus

"[This] cunningly crafted jigsaw puzzle is colored by vibrant prose and capped by a you'll-never-guess conclusion."
-Entertainment Weekly

"Shepard has found a voice here that is as strong and confident and full of wise observation."
-O magazine

"Riveting and deeply felt and true."
-Dave Eggers, author of A Heartbreaking Work of Staggering Genius

"This is a book that haunts and tantalizes and possesses us long after the last page is turned."
-Tim O'Brien author of the Pulitzer Prize finalist The Things They Carried and National Book Award winner for Going After Cacciato