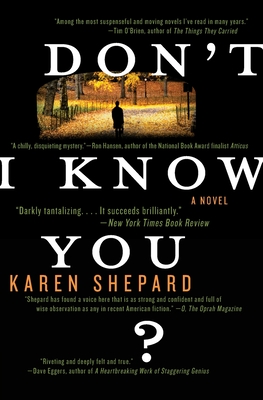 Don't I Know You?

Gina's son, Steven, caught only a fleeting glimpse of the killer as he fled. If only, he wonders again and again.

As Lily Chin prepares for her upcoming wedding, a mysterious woman appears to inform her of her fiancé's secret life—which may have included Gina Engel.

Louise Carpanetti received a phone call from the dying Gina. Now, more than a decade later, she is forced to finally acknowledge a shocking possibility: the killer might be her emotionally disturbed son. . . .

Told through three distinct yet interconnected narratives, Karen Shepard's Don't I Know You? is an intricate, dazzling, and devastating psychological drama that absorbs and thrills as it examines the complexities of the human heart.

“Riveting and deeply felt and true.” — Dave Eggers, author of A Heartbreaking Work of Staggering Genius

“Shepard has found a voice here that is as strong and confident and full of wise observation.” — O magazine

“This is a book that haunts and tantalizes and possesses us long after the last page is turned.” — Tim O’Brien author of the Pulitzer Prize finalist The Things They Carried and National Book Award winner for Going After Cacciato

“A chilly, disquieting mystery in which the answer to the title is always ‘no.’” — Ron Hansen, author of Mariette in Ecstasy and the National Book Award finalist Atticus

“[This] cunningly crafted jigsaw puzzle is colored by vibrant prose and capped by a you’ll-never-guess conclusion.” — Entertainment Weekly

Karen Shepard is the author of the novels An Empire of Women and The Bad Boy's Wife. Her work has appeared in Atlantic Monthly, Self, Bomb, and other publications. She teaches writing and literature at Williams College in Williamstown, Massachusetts, where she lives with her husband, writer Jim Shepard, and their three children.