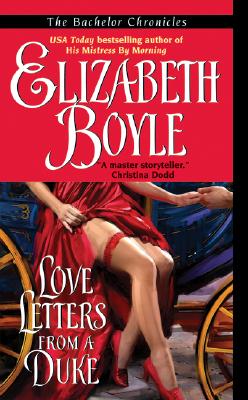 Love Letters From a Duke

Though she can't afford the coal to heat her drafty Mayfair mansion, Felicity Langley still clings to her dream of marrying a duke—one she's had since her very first curtsy. After all, she's been promised to the very lofty Duke of Hollindrake for the last four years. Now all she has to do is meet him. But what Felicity doesn't realize is that she has met her duke—he's the altogether too handsome man who Felicity has just mistaken . . . for her new footman!

By rights, Thatcher should immediately set this presumptuous chit straight and tell her he has no intention of honoring the arranged betrothal. But he's quickly smitten by Felicity's delightful determination, her irrepressible charm . . . and her breathtaking sensuality. Yes, she'd wed him in an instant were his true identity revealed—but Thatcher's vowed to marry only for love. So begins his deception and his conquest of this uncommon woman who doesn't believe in romance, but is about to find her heart and passion set aflame by the unlikely man she's sworn to resist.

Elizabeth Boyle has always loved romance and now lives it each and every day by writing adventurous and passionate stories that readers from all around the world have described as “page-turners.” Since her first book was published, she’s seen her romances become New York Times and USA Today bestsellers and has won the RWA RITA® and the Romantic Times Reviewer’s Choice Awards. She resides in Seattle with her family, her garden, and her always-growing collection of yarn. Readers can visit her at www.elizabethboyle.com, or follow her own adventures on Twitter, Facebook, and Instagram.  www.avonromance.com www.facebook.com/avonromance